“Zionism 101” Online Course Tells the Truth About Israel’s Past 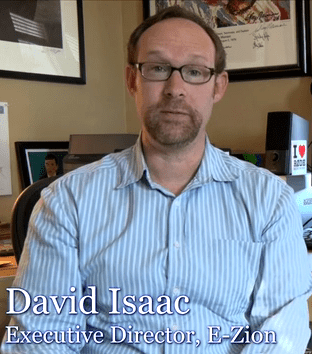 In today’s fast-paced environment of online informational exchange, Israel is increasingly being vilified by her detractors. Her supporters are growing fewer in number as a new generation, less knowledgeable in the history of Zionism and the Jewish state, does not know how to respond to accusations. How does one address this challenge?

If you are David Isaac, the answer lies in Zionism 101, an online video course aimed at educating the public about Zionist history in an engaging manner. The project is currently running a crowdfunding campaign to complete the series.

Zionism 101 is a free program of seven- to eight-minute documentary videos arranged by topic, covering a wide range of subjects from the founding fathers and origins of Zionism to the revival of the Hebrew language. Thirty-seven shorts are available to date, with ten additional films planned. The videos contain archival photos and footage, some of which is quite rare, accompanied by music, animation and voice-over. All that is required to view the clips is registration to the website.

One interesting aspect of Zionism 101 is the attention it gives to Christian Zionism, which Isaac, co-creator of Zionism 101, described to Breaking Israel News as “a fascinating and under-taught aspect of Zionist history.” He noted that before modern Zionism came on the scene there was Restorationism, the Christian belief that the Jews must return to their land. The site’s course, “Christian Zionism,” includes seven films on the topic. “Christian Zionists may not fully appreciate how rich their history is and how deep it goes,” Isaac said. “We hope Christians will view these films and come to realize they, too, are part of a proud heritage.”

“There hasn’t been a documentary film series on Zionism in 30 years,” Isaac explained. “This is the only Zionism film series designed for the web, on which more and more people depend for information.”

“Zionism 101 offers a fair appraisal of the movement,” its website reads. “We don’t confer sainthood on Zionist leaders or romanticize major historical events. We seek simply to tell the story.”

The program is the brainchild of Isaac and Herbert Zweibon, the late chairman of Americans for A Safe Israel. Zweibon, Isaac explains, became concerned over the growing number of anti-Israel attacks before his death in 2011. Zweibon, it should be noted, built strong ties to the Evangelical community dating back decades.

“We should have been teaching Zionist history all along,” Isaac said. “But the Jewish community has grown complacent. Studies have shown, for example, that Jewish schools offer less education on Israel now than they did decades earlier. To counter this, Isaac says, “for the last two years, we have partnered with an organization that runs a course for Jewish Day schools and our films are currently being used in 60 schools. We are also interested in providing our materials to Christian Sunday schools.”

Isaac writes, produces, and directs the site’s films, while his brother, Raphael Isaac, edits them.

E-Zion, Inc., the non-profit organization behind Zionism 101, needs to raise a substantial sum to fund the remaining ten videos. The crowdfunding campaign is going well and Isaac is counting on more to contribute. “We have produced 37 films,” Isaac elaborated. “We are in the home-stretch with only ten films to go. But those ten films are all-important. They tell the life story and contributions of three major figures in Zionist history: Chaim Weizmann, David Ben-Gurion and Vladimir Jabotinsky. Each one of these historical figures will have their story told in a four-part series.”

Even when he reaches his target, however, Isaac says he will not be done. “I want to continue working in this space, producing pro-Zionist documentaries, about the movement’s history, heroes and struggles.”

Asked for his advice to others wishing to spread the word about Zionism today, he offered, “Educate yourself about Zionism. Join pro-Zionist organizations. If you have children in school, make sure that what they are being taught isn’t biased against the State of Israel. And some home-schooling on this topic is probably essential to inoculate your children against the enormous volume of anti-Zionist propaganda out there.”