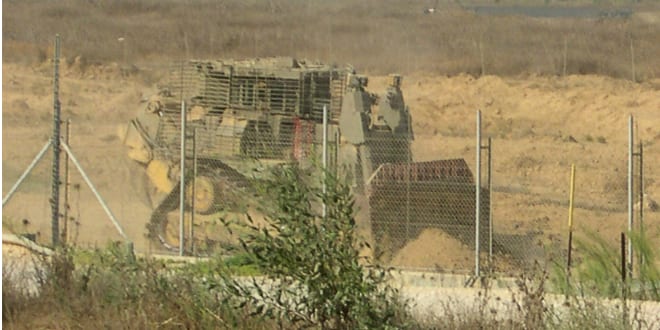 An IDF D9 armored bulldozer was targeted by a massive Improvised Explosive Device (IED) on the border between Gaza and Israel Friday morning, but the vehicle and the two-man crew escaped unscathed in what Israeli news sites have called a “miracle on the Gaza border”.

The bulldozer was operating in the Sdot Negev Regional Council area, adjacent to the northern area of Gaza. The explosive was planted  west of the security fence, within Israeli territory but in a security perimeter area Gazans are forbidden from entering. This buffer zone prevents terrorists from approaching the fence. The vehicle reportedly drove directly over the IED, which was exploded remotely.

Commenting on the timing of the incident on the eve of the Jewish month of Nissan, Rabbi Lazer Brody told Breaking Israel News that “this miracle of saving Jewish soldiers is meant to remind us what the month of Nissan is all about – that God is protecting Israel and don’t ever forget it.”

Nissan, the Hebrew month in which Jews celebrate the holiday of Passover, began with sundown on Friday, mere hours after the incident. Nissan is known in the Jewish tradition as “the festival of our redemption”, when God redeemed the ancient Israelites from slavery. It is believed that God will once again bring salvation to Israel in this month.

Noted author Rabbi Brody has written extensively about the divine miracles that took place during Operation Protective Edge, which provided great comfort to the nation of Israel during that particularly difficult time period.

“You see, Hashem (God) hides within nature,” Brody explained to Breaking Israel News. “In my town of Ashdod, a Katyusha rocket hit a gas station with two tanks containing 70,000 liters of fuel and propane. Both tanks were charred by the missile, but neither exploded. Heaven forbid, had the tanks exploded half of Ashdod would have been destroyed.”

Many soldiers reported experiencing “miracles” on the battlefield. With everything from divine intervention in the weather to the appearance of Biblical figures on the scene, some accounts were suspect, but the relatively low casualty rates among IDF soldiers seemed to suggest that someone on High was indeed looking out for them.

Even the enemy recognized that God was on the side of Israel. Rabbi Brody reported on a news story in which a Hamas commander complained that God “changes the path of our rockets in mid-air”, asking his interviewer, “What can I do if Allah does miracles for them?”

Rabbi Brody concluded to Breaking Israel News, “Through miracles [such as what happened to the IDF soldiers on Friday], Hashem is showing His love for the Jewish people and it is preparation for the final geulah (redemption).”