Top Iranian General: Iran Preparing for All-Out War With US 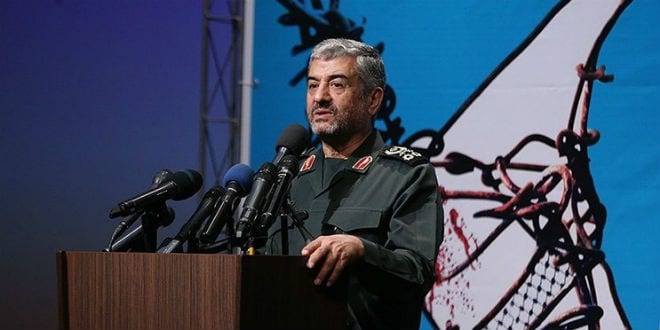 Iran is preparing for an all-out war with the US, said Iranian Revolutionary Guards Corps (IRGC) Commander Major General Mohammad Ali Jafari on Tuesday at a gathering of senior IRGC commanders in Tehran.

Jafari said that Iran’s long-term military plan has been shaped by anticipation of a future war with America in which Iran would be the “decisive victors”. “For years, we have been building power on the presumption of a widespread war with the US and its allies, and have developed all our capacities and capabilities for decisive victories over such enemies,” he said, Tasnim News reported.

In a statement unlikely to surprise anyone paying attention to Iran’s constant anti-Western rhetoric and threats and its blatant dismissal of international condemnations of its arms developments, Jafari emphasized that a combative solution is prioritized over the weaker tools of diplomacy.

“Before political and diplomatic options, we have gotten prepared for a military option,” he said.

The announcement will surely come as a surprise to US President Barack Obama, who has often insisted that diplomacy is the only way to move forward in relation to Iran.

If the time should come for a military confrontation, Jafari predicted that, as in past conflicts in the region, the US will not be able “to do a damn thing” about it.

He added that Iran is also prepared to confront the “rude” and “stupid” behavior of Arab states who have allied themselves with the US, warning, “Regimes like Saudi Arabia, Bahrain and their peers are symbols of modern political underdevelopment, and the IRGC … has made preparations for response to their rudeness and stupid behavior, which stems from [their] reliance on the US power.”

Jafari also criticized certain Arab states for their “disgraceful” support of Israel, said Tasnim News, though the specific states were not named.

As for Iran’s missile program, which has repeatedly violated UN and international restrictions, the Iranian general promised that the regime will continue to develop and mass-produce ballistic missiles with higher accuracy and more destructive power in flagrant disregard of bans.

Its most recent offense occurred in March, when Iran tested multiple ballistic missiles in a move which a US State Department official said “violated the intent” of a United Nations resolution which aimed to curtail Iran’s missile activity.

Meanwhile, Russia is preparing to make its first shipment of S-300 surface-to-air defense systems to Iran in the coming days, a senior Russian official announced on Tuesday.

The arms deal was originally made in 2007 but prevented from going through by a UN Security Council sanction that limited weapons sales to Iran. Last year, on the heels of the controversial nuclear deal which five world powers signed with Iran, Russian President Vladimir Putin signed a new contract to supply the Iranian regime with the missile defense systems.