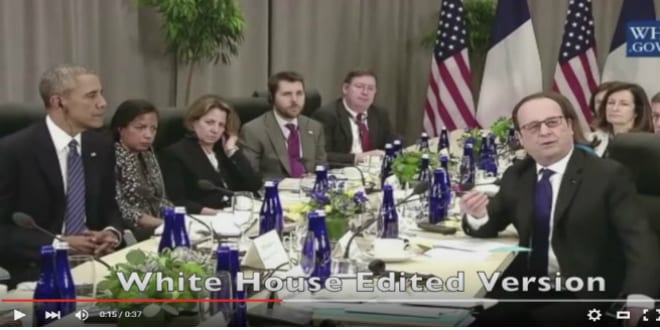 The official White House video of a visit last Thursday by French President Francois Hollande was posted with the audio edited to exclude his reference to “Islamist terrorism”.

The meeting was part of  the Nuclear Security Summit of over 50 world leaders. The eight minute video had the reference edited out but at a little over halfway, Hollande is heard saying in French, “the roots of terrorism, Islamist terrorism, is in Syria and in Iraq.” The official White House video omitted the audio English translation of the words “Islamist terrorism” at that point.

The editing was caught by the Media Research Center (MRC), which posted the omission in the context of Hollande’s speech.

“We are also making sure that between Europe and the United States there can be a very high-level coordination.

“But we’re also well aware that the roots of terrorism, [The following words were said by Hollande in French but the English translation was omitted, replace by a gap in the audio: “Islamist terrorism is in Syria and in Iraq.  We therefore have to act both in Syria and in Iraq, and this is what we’re doing within the framework of the coalition.”]  And we note that Daesh (ISIS) is losing ground thanks to the strikes we’ve been able to launch with the coalition.”

A transcript of Hollande’s speech on the White House website did include the reference to Islamist terrorism in entirety.

After MRC’s report, the video was removed and replaced with a video that had an accurate and complete audio translation of Hollande’s speech.

The White House posted an explanation claiming “a technical issue with the audio during the recording.” MRC questioned how the audio section absent due to a glitch was able to be recovered and reposted.

Obama has been much criticized for not connecting Islam to terrorism. Hollande may be less reluctant to make such a link due to the two terror attacks in Paris last year that killed almost 150 people.

In January, after the Charlie Hebdo attacks in Paris, Obama was criticized for not attending the unity march in Paris, which was attended by many other heads of state. The leaders of England and Germany attended, and Israeli Prime Minister Benjamin Netanyahu appeared despite not being invited, as a show of solidarity. Hundreds of thousands of people attended.