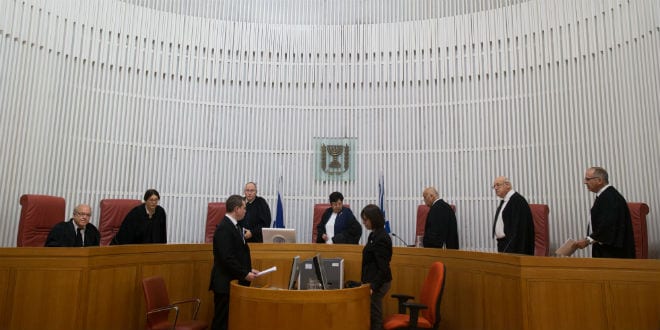 In a major decision, the Israeli High Court ruled on Thursday that any conversion to Judaism performed by any Orthodox Bet Din (Rabbinical court), in Israel or abroad, will be valid for the purposes of obtaining Israeli citizenship under the law of return.

The petition leading to the court case was filed by a group of converts whose status had been refused by the state and the Israeli rabbinate. They were joined in their court battle by the Conservative and Reform movements.

The court ruling affects civil issues and not religious. The court of nine justices headed by Chief Justice Miriam Naor announced while making its decision, “This is not a religious question, but rather a civil-public one… We are not determining anything in these proceedings on the question of recognizing the conversion that the petitioners underwent in other contexts.”

The Chief Rabbinate controls all aspects of Jewish ritual in Israel, such as marriage, divorce and burial.

Until now, converts could only gain Israeli citizenship if they converted outside of Israel and lived in a Diaspora Jewish community, or converted in Israel under the auspices of the Chief Rabbinate. Foreign conversions do not need to be Orthodox.

Justice Naor wrote in her decision:

“I do not see any justification to interpret the Law of Return in a way that will cause discrimination between those who converted in Israel and those who converted abroad. For this reason, too, we must grant preference to the interpretation according to which conversion for the purpose of the Law of Return is a conversion conducted in a recognized Jewish community, be it performed in Israel or abroad.”

Many considered the Chief Rabbinate’s oversight to be monopolistic. The rabbinate’s control over all aspects of Jewish life has been the focus of several court battles recently. Almost two months ago, Israel’s Supreme Court ruled that mikvahs (ritual baths) in the country must open up to non-Orthodox conversion rituals. In addition, at the end of January, the government approved a non-Orthodox section for prayer at the Kotel (Western Wall).

Justice Neal Hendel wrote in his decision: “It is true that in our country there is the Chief Rabbinate which is trusted with a variety of religious issues. Our purpose is not to challenge its status, but in our case the Law of Return does not endow the Chef Rabbinate with an exclusive control over the process of conversions.”

“Creating an excessive concentration of power and giving the Chief Rabbinate complete monopoly over the institution of conversions — a monopoly whose practical meaning would be the adoption of a more severe approach and placing obstacles before Jews who wish to make Aliyah — are in contrast with the central purpose of the Law of Return, which is encouraging Aliyah,” Hendel wrote.

It should also be emphasized that the court’s ruling specified conversions performed by recognized Orthodox rabbis, and not from any other movement, though the Reform movement hailed this as the beginning of major change.

Reform Rabbi Gilad Kariv, head of the Reform movement in Israel, said, “The High Court decision determines unambiguously that there exists more than one way to convert in the State of Israel, and that a conversion which is conducted in a Jewish community in Israel belonging to one of the Jewish denominations would be recognized as valid.”

Sephardic Chief Rabbi Yitzhak Yosef, called the ruling “scandalous,” saying, “It is inconceivable that the ‘pirate’ conversion industry that is not regulated by any governmental body will be recognized as official.”

Ashkenazi Chief Rabbi David Lau reacted by saying, “The Supreme Court and its justices will not decide who is a Jew; only the Torah of Israel will.”