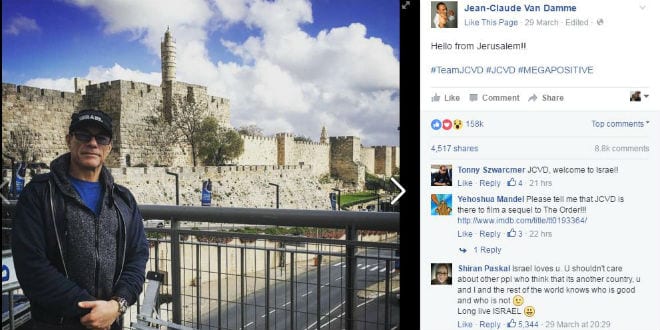 Belgian film star Jean-Claude Van Damme, known as the “Muscles from Brussels”, found it difficult to withstand the pressure from Israel haters when he posted a friendly message Tuesday from Jerusalem. Posing in a hat marked “Israel” in front of the Western Wall, Van Damme’s photo, which he posted to Facebook, was originally captioned “Shalom from Jerusalem, Israel!” However, intense backlash from fans prompted him to tone down his support for the Jewish state.

Van Damme was in Israel on a five-day visit when he uploaded the picture to Facebook. Almost immediately, Soufiane Benalla responded, “you should say salam from palestine ;-)”, garnering 1,357 likes so far. Isa Tubadan claimed, “Jeruzalem is not from israel But from Palestina,” with 879 likes.

Salah Matay claimed he was once a fan, but has been let down by his former hero. “Hi Damme … earlier u was my hero … i don’t know ur religion ,,, i wasn’t interested because i believe that who create u who will judge you for so and so … i sow today your picture by the wailing wall in Jerusalem ,,, u lost my respect and millions like me … we won’t argues on this case ,,, only one question will ask you !!! HOW MUCH THEY PAY YOU FOR THIS ???”

Hiba Abusharkh denied the very existence of Israel. “Oh my god! What? Israel? Well actually I believe you are one of THE BEST actors, and I truly love watching your movies, but when I read your caption on this picture I was really depressed! It’s Palestine, occupied Palestine, there is no Israel, I’m not gonna argue with you about this fact but your Palestinian fans are really annoyed because of this!” she wrote.

Other posters claimed the Islamic State (ISIS) was actually an Israeli intelligence agency and that Israel would soon disappear from the map.

Van Damme had his share of supporters, too, however. Shiran Paskal garnered 5,301 likes for her post saying, “Israel loves u. U shouldn’t care about other ppl who think that its another country, u and I and the rest of the world knows who is good and who is not Long live ISRAEL.”

Several fans expressed excitement at his presence, inviting him to their homes and asking if he is filming in Israel.

Orsan Botrous wrote, “omg i dont belive that you in jerusalem israel im from nazareth israel come to my home you welcome mr van dam.”

“Please tell me that JCVD is there to film a sequel to The Order!!!” Yehoshua Mandel posted.

Apparently in the interest of appeasing his angry fans, Van Damme altered the caption accompanying his photo, which now reads “Hello from Jerusalem!” with no country identified. Of course, this disappointed his pro-Israel supporters.

Avihai Sarusi indicated the move showed weakness. “Too bad you have deleted the word Israel, and succumbed to the pressure of anti-Semitism, Israeli children grew up with your movies and acknowledge you as a strong man, which probably is not true.”

Rose Kahn wrote, “Disappointed that you edited your post to remove Israel. Jerusalem is the capital of Israel (and has been for centuries). You felt pressure from your fans, but you should have stuck to your guns.”

It should be noted that not all of Van Damme’s pro-Israel supporters were Jewish. Yahya Mahamed wrote, “Welcome to israel!!! The only democracy in the middle east and the only place in the region where minorities get their full rights! Enjoy your stay and please ignore the haters.” When asked by another reader why he would support Israel, he responded, “Just doing what’s right.”

He then added, “We have a lot of people like me around. They’re just afraid to speak up because they’re afraid of the consequences. Sadly. But Israeli arabs are speaking up, and that’s a good thing. Israel is the only place that i call home and i don’t want anything to happen to my homeland.”

Carlos Zepeda wrote that Van Damme and Israel have their supporters all over the world. “Bravo, Jean-Claude Van Damme!! We in the USA and Latin America love your support for Israel! Don’t let some of those hateful Arab – Palestinian so called “fans” discourage you with their reprehensible comments. Where are there voices when their brothers in faith are killing hundreds of innocent people in Europe and the rest of the world? We love you man! May the blessing of the true God, The Holy One of Israel be upon you!”