Palestinian Accusing “Settlers” of Hate Crime Did it Himself

Home » Palestinian Accusing “Settlers” of Hate Crime Did it Himself 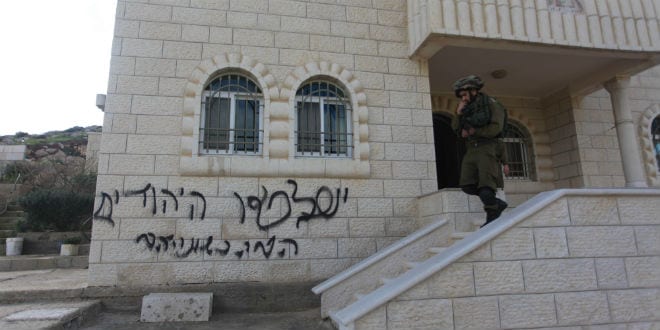 A Palestinian man who claimed earlier this month to have been targeted by Jewish terrorists in an anti-Arab hate crime had fabricated the entire incident, police investigations found. The man now faces charges for lying to police.

The man, a resident of an Arab village in Judea located near Bethlehem, reported to police that a group of five Jewish settler youth had set fire to his home, graffitied “Death to Arabs” in Hebrew on a nearby wall, cursed him and attacked him personally with stones. His father confirmed the story, telling investigators he had seen the Jewish teens in the area on the previous day.

Israeli officials have been extremely sensitive to anti-Arab violence since last summer, when an Arab home in the village of Duma was torched, supposedly by Jewish extremists, and three members of an Arab family were killed. The incident brought international condemnation and led to a crackdown on violence perpetrated by Jews.

Israel Police took the complaint seriously and immediately launched an investigation into the man’s story – but quickly encountered problems. Investigators found no traces of flammable material at the alleged arson site, and, in addition to the lack of forensic evidence, discovered a number of contradictions and discrepancies between the man’s version of events and eyewitness testimony.

Put to a polygraph test, the “victim” failed, Arutz Sheva reported, and was arrested and turned over to military prosecutors.

“During the investigation of the most recent incidents, suspicions emerged that the complainants had lodged fabricated reports,” the Israel Police said in a statement.

The suspects had apparently set a fire themselves and accused neighboring Jews of committing the crime in a deliberate effort to “harm the delicate fabric of life during a complicated security situation.”

The criminal charges against the man include obstruction of justice, making false claims to authorities, and violating public order, the police said in a statement. He has been remanded until next month. Prosecutors expect to indict within weeks.

While Jewish violence against Arabs occurs, it is rare, quickly addressed by Israeli authorities, and paltry compared to the overwhelming wave of violent attacks by Palestinians and Israeli Arabs, including stabbings, shootings, and car rammings, which have been committed against Jews in recent months.