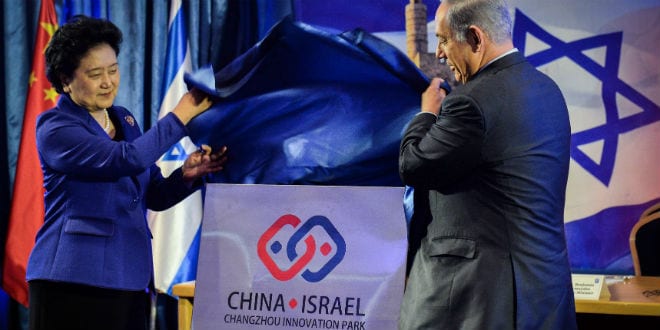 Prime Minister Benjamin Netanyahu expressed gratitude and appreciation to visiting Chinese Vice Premier Liu Yandong for her determination and commitment to complete a free trade agreement with Israel during a meeting at the Israeli Foreign Ministry on Tuesday, March 29.

“I was very glad to hear today from Vice Premier Liu that China is ready to start negotiating for free-trade with Israel,” Netanyahu remarked. “This is a significant development and we are ready to do it immediately.”

According to Netanyahu, a free-trade agreement would significantly improve bilateral cooperation in many different sectors.

“There is so much we could do together—in health, distance education, agriculture, aquaculture, information technology, in all fields,” said Netanyahu. “Cooperation with China could yield major results and we believe Israel can be the perfect partner.”

Vice Premier Liu fully concurred with Netanyahu’s assessment.  “We need to continue this cooperation for the benefit of both peoples,” Liu said. “Israel and China are moving in the direction of major joint projects.”

A future free-trade agreement would cover a variety of issues including standardization, implementation of regulations, and the removal of existing trade barriers for imports and exports. It would also detail bilateral cooperation in the technological and economic sectors.

A free-trade agreement between Israel and China may not only increase the gross national product of both countries, but also would most likely double the total value of traded goods between both countries, which currently stands at $8 billion.

The meeting today between Netanyahu and Liu was the second to take place through the Innovation Committee that was founded during Liu’s 2014 visit to Israel. The committee, led by Israel’s Foreign Ministry and China’s Ministry of Science and Technology, first met in the Chinese capital of Beijing in January, 2015. It is the largest intergovernmental platform between Israel and China.

Michael Bachner contributed to this report.