Family of Terrorist Killed in Hebron: No One Has Apologized to Us

Home » Family of Terrorist Killed in Hebron: No One Has Apologized to Us 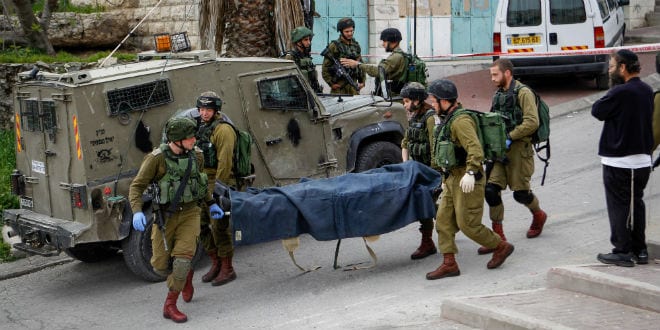 Making headlines all over social media this week is the controversial story about an IDF soldier who shot a neutralized terrorist after he and his accomplice carried out a stabbing attack in the Biblical city of Hebron last Thursday morning.

Victims and witnesses notwithstanding, one particular family has claimed to be the most victimized of all: that of the would-be murderer who was shot and killed by the soldier.

Apart from the family’s anger over the shooting, which the world saw in a video released by left-wing NGO B’Tselem, the dead terrorist’s uncle told several Israeli TV channels that they are offended no Israeli officials have apologized to them for their son’s death.

The family is also up in arms at the positive response the soldier is receiving from some members of Knesset, such as Education Minister Chairman Naftali Bennett, who visited the soldier’s family to offer his utmost support as the IDF soldier endures a fierce battle in court defending actions which violated IDF protocol.

The soldier took the shot in response to strong suspicions that the terrorist may have been hiding an explosive belt underneath his bulging jacket, a very unusual choice of attire on an extremely hot day.

Currently, there is a petition being disseminated on social media channels defending the soldier. Simultaneously, some Israeli officials are strongly criticizing his behavior.

Israeli MK Ahmed Tibi (member of the Joint Arab List), for example, proclaimed that “IDF soldiers and police are shooting the Palestinians and executing them in cold blood as a result of the incitement by Israeli ministers and politicians” while on a trip in Romania.

Additionally, the UN released a statement castigating the soldier’s actions, the Jewish Press reported. Nicolay Mladenov, Special Coordinator for the Middle East peace process, condemned the “gruesome, immoral and unjust act that can only fuel more violence and escalate an already volatile situation.”

The terrorist’s body will undergo an autopsy, to be performed by the IDF and observed by an Arab pathologist, at the family’s request. The second terrorist’s body was returned to his family for burial shortly following the attack.

Meanwhile, the incident is pending investigation.