The PA Knows Who is “Really” Behind Brussels Terror

Home » The PA Knows Who is “Really” Behind Brussels Terror 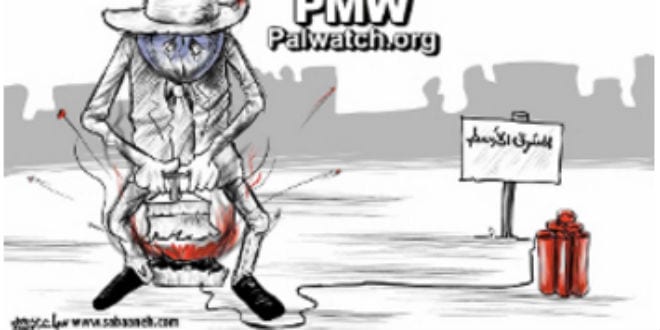 Despite the Islamic State (ISIS) acknowledging responsibility for the terror bombings in Brussels last week, Palestinian Authority (PA) representatives have pointed a finger in another direction entirely, blaming Israel for the attacks. Palestinian Media Watch (PMW) has identified multiple statements in which the PA accuses the Jewish State of masterminding the murder of 31 victims and injury of hundreds more.

The double attack on a Brussels airport and nearby subway station Tuesday was claimed by ISIS as revenge for the arrest of Paris terrorist Salah Abdeslam days earlier. Yet according to a newspaper column by Fatah Revolutionary Council member Muwaffaq Matari, it is no coincidence that it happened after much of Europe began showing increased support for the Palestinian cause.

“We do not want to throw accusations, but why did the crimes and terrorist massacres of ISIS in France and Brussels coincide with the European Union’s first attempt to free itself of the Israeli extortion and of the Jewish persecution in Europe complex, and [coincide with] European members of parliament’s support of the Palestinian right [to statehood]?” Matari wrote in official PA daily Al-Hayat Al-Jadida.

Matari is not alone in expressing this position. PA Security Forces spokesman Adnan al-Damiri also suggested through a Facebook post that Israel is really behind the attacks. He went on to link the attacks with the recent EU decision to support the Boycott, Divestment and Sanctions (BDS) movement by labelling Israeli goods produced in Judea, Samaria, the Golan Heights and East Jerusalem “made in the Occupied Territories”.

“Question: How come Europe has turned into the scene of terror attacks and murder of innocent civilians after the majority of European parliaments have recognized the State of Palestine, and after the expansion of the European boycott of products made in Israeli settlements? Is it possible that the timing of the targeting (of Europe) by ISIS and its offshoots is innocent and a coincidence? And why specifically Europe now that the European popular and official support for Palestine is growing? Help me understand and answer,” al-Damiri wrote, according to Israel National News.

Al-Damiri also blamed the victims, saying while he does not “gloat”, Europe and the US must recognize they have brought terror on themselves.

“While we condemn and denounce terrorist acts everywhere in the world, we Arabs are the ones who have been most severely burned by the fire of terror, which has been created and exported by the US and Europe since the Arab Jihad fighters in Afghanistan, and before that by exporting the Jewish terror to Palestine, supporting it and justifying it. Today, Europe is being burnt by its [the terror’s] fire in its airports and squares. I do not gloat but feel pain over every innocent soul that was killed, but those who prepare the poison will taste it themselves, and today Europe is having a taste of what it prepared with its own hands. Unless you fight terror everywhere, first and foremost in Palestine, since the [Israeli] occupation is the ugliest form of terror, as well as in Syria, Iraq, Yemen, Libya, Egypt, Tunisia and Jordan – you will be burnt by its fire, and terror has no religion.”

This message was also the gist of a political cartoon printed in Al-Hayat Al-Jadida the day after the Brussels attack. The image shows a figure with a globe for a head trying to blow up the Middle East but inadvertently blowing himself up in the process.

This is not the first time the PA has blamed Israel for ISIS-related terror. In November, PA Chairman Mahmoud Abbas’s Fatah party accused Israel of masterminding the Paris attacks which killed 130 people. The PA has also repeatedly suggested that Israel and the US are to blame for the existence of ISIS today.

Israel is no stranger to false accusations. In the book of Ezra, the adversaries of the returned exiles sent letters to the Persian rulers bearing false testimony of the Jews’ intentions to rebel, causing the construction of the Second Temple to be halted.