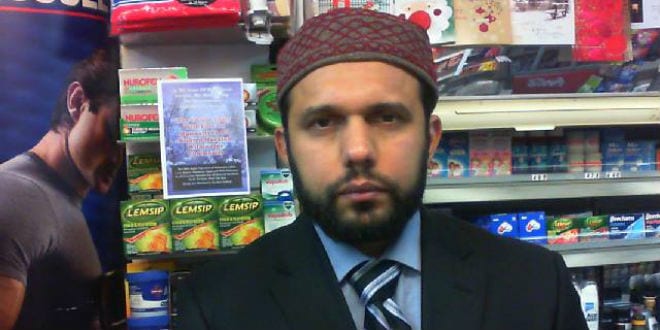 In an apparent “religiously prejudiced” attack, a Muslim shopkeeper was murdered in Scotland on Friday after posting a message of solidarity with his Christian patrons.

Later that evening, Shah was found severely injured lying on the ground near his shop with at least 30 stab wounds. A family friend, Mohammad Faisal, told the British Daily that a bearded Muslim wearing a long robe had entered the shop and spoken to Shah in his native language before stabbing him in the head with a kitchen knife.

After hearing the initial shouts, Shah’s brother, who worked next door, ran in and found the attacker laughing while sitting on Shah’s bleeding chest. The brother attempted to drag Shah’s body away from the killer, but the assailant continued stabbing the shopkeeper until Shah eventually collapsed. Faisal also told the Daily that he witnessed the attacker stamping on Shah’s head throughout the vicious affair.

Despite the best efforts by local medical services to resuscitate the shopkeeper, Shah succumbed to his wounds en-route to the hospital.

Authorities arrested a 32-year-old man on Friday on suspicion of carrying out the brutal attack.

Police forces believe the suspect, also a Muslim, drove well over 200 miles in order to murder Shah for his peaceful message. He is currently in police custody pending an investigation.

Shah, originally from Pakistan, had a positive reputation in the community. Patrons of the store, Shah’s Health and Fitness, memorialized the shopkeeper as someone who embodied kindness while residents of the neighborhood described him as a “real gentleman,” BBC Scotland reported.

Since his murder, two separate vigils have been held for Shah, both of which were set up outside his shop and attended by hundreds.

Said one vigil attendee: “Everybody has said [Shah] was the nicest man. He was clearly much-loved.” Another woman said, “He was an amazing, wonderful man, he couldn’t do enough for you.”

The nationality of the perpetrator, as well as the brutality of the attack, lends evidence to the ongoing blatant Muslim intolerance against others who practice peaceful coexistence. Indeed, Faisal indicated as such saying the attacker “must have been an extremist” who was dissatisfied with what Shah was preaching.