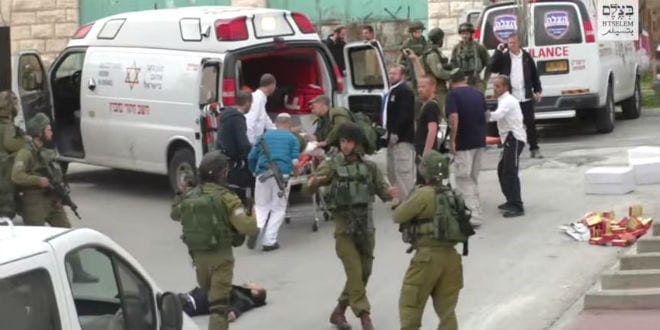 An online petition calling on the IDF brass to award a medal—instead of handcuffs—to an IDF medic who shot an Arab terrorist who was lying on the ground in Hebron last Thursday, has garnered more than 35,000 signatures in three days. “This soldier should not have been arrested with expediency, he should have been praised, because with his quick and decisive action he may have prevented a catastrophe.”

Noting that the event took place on Purim, the petition says “the terrorist did not arrive with shalach manos (food packages) to hand out to the soldiers. He arrived with his terrorist friend, armed with knives, to murder soldiers. The terrorist was dressed in an overcoat on a very warm day and could have easily been hiding on his person an explosive charge which, had it blown up, would have made the mothers of dozens of IDF soldiers cry today instead of rejoice in the Purim holiday.”

The petition declares: “A terrorist planning to carry out a murderous attack against citizens of the state and against security personnel must know that he would not return home alive, and would not go to prison.”

Israelis have responded with a groundswell of protests to the arrest of a 19-year-old soldier from the Shimshon battalion of the Kfir Brigade, who reportedly arrived on the scene at a check point near Hebron after a stabbing attack by two Arabs on another soldier. One terrorist was already dead, the other lying on the ground unconscious. A video distributed by leftwing NGO B’Tselem showed the arriving soldier shooting the second terrorist dead. Several videos of the event include a comment by one of the Israelis on the scene warning everyone not to touch the terrorist on the ground for fear he was wearing a suicide belt.

Former foreign minister MK Avigdor Lieberman went on Army Radio Sunday morning to complain for not being allowed to visit the shooting soldier in military jail — when known Arab terrorists are visited and hailed by Arab and other MKs. Lieberman also accused Prime Minister Netanyahu and Defense Minister Ya’alon of doing B’Tselem’s biddings, not once but four times since the new wave of terror had begun.

What bothered many Israelis was not necessarily the fact that the soldier was arrested and is being investigated by military police, rather the blast of condemnations on the part of senior politicians and military brass, including Chief of Staff Gadi Eizenkot, who did not wait for the report on the event or for the decision of the military prosecutor, and used the shooting soldier for a punching bag, to promote their own public image.

Channel 2 News political commentator Amit Segal, who is an Orthodox Jew, wrote Saturday night that this episode has shown a total gap between the wide public and its elected officials in a way that had not been seen in a long time. Support for the soldier didn’t come only from the nationalist camp, Segal noted, but from everywhere, as people were questioning how a routine confirmation of death could possibly end up in a murder indictment.

Very few MKs, even on the right, dared to actually support the killing of the terrorist who was lying on the ground. The most they said was a call for restraint until the investigation is concluded. No one dared suggest that the rules of engagement de facto have long since been changed in the security forces, and that the more certain a would be terrorist is in their death, the fewer attacks would be attempted.

A mass rally is planned for Tuesday outside the military court in Jaffa, where the soldier will be going on trial. There have been calls for the resignation of Chief of Staff Eizenkot because “we need an Israeli, not a Belgian Chief of Staff.”