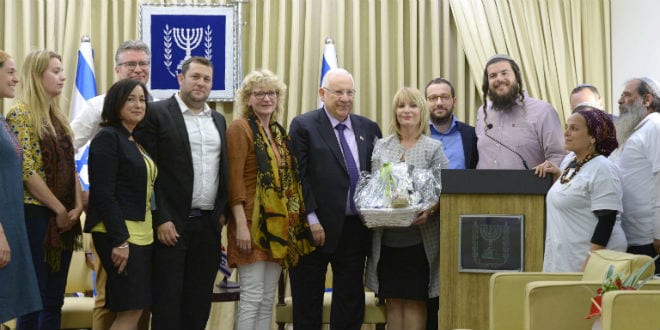 Lev Haolam, a group of activists in Israel and abroad assisting Jewish businesses in Judea, Samaria, and the Golan in fighting the efforts of the Boycott, Divestment and Sanctions (BDS) movement, held a meeting on March 22 at the President’s Residence in Jerusalem.

“We’re going out and saying that this is the way to fight the boycott and to end the suffering of all these companies in Judea and Samaria,” continued Barry.

“For me, this is not just about a package with beautiful products that I receive every month, but it’s about understanding that there is a name, a family, a face, and a story behind every product,” said Arjanne Kloos, a customer of Lev Haolam who helps the organization run educational and informative events about Israel in Holland.

Kloos expressed continued determination to be victorious over the efforts of those attempting to boycott Israel.

Kloos’ passion and commitment to spread the truth about Israel developed as a result of some of her own independent discoveries.

“I come from a Christian background and I remember that I read a book a couple of years ago called ‘Blood On Our Hands,’” Kloos related to TPS. “It is specifically about the history of Christianity towards Jewish people in Europe, and I remember closing the book and thinking, ‘Why did nobody tell me this before? Why have I never heard about the big [European] theologians saying the worst things about Jewish people?’”

“If we don’t tell people, they won’t know,” Kloos concluded.

Kloos expressed disappointment and shame at what she felt is Europe’s ongoing failure to learn from history with regards to its relationship with the Jewish people. In particular, she referenced the European Union’s new guidelines which mandate that products of Jewish businesses in Judea and Samaria not be labeled as from Israel.

“I want to start by saying how deeply ashamed I am as a European that Europe is once again labeling Jewish products,” Kloos said at the opening of her remarks at the President’s Residence. “I am ashamed that when it comes to Israel, Europe is using double standards and singling out the Jewish state. Have we not learned from our history?”

Lev Haolam founder Nati Rom agreed. “I am overwhelmed that when I go and speak to citizens of Europe and the US and get in touch with the grassroots, you see it’s another story,” Rom told TPS. “They don’t understand the logic of boycotting the only democracy in the Middle East or why they must boycott Israel instead of radical Islam.”

Rom also expressed praise for Kloos as well as hope that there will be many others like her who will fight the battle against those who boycott Israel.

“Arjanne is one example of thousands of partners and people who love Israel and want to find ways to express their love and support,” Rom said. “We hope Jews and non-Jews all over the world will join us and that the voices expressed here today will spread and will bring us more partners to Lev HaOlam.”