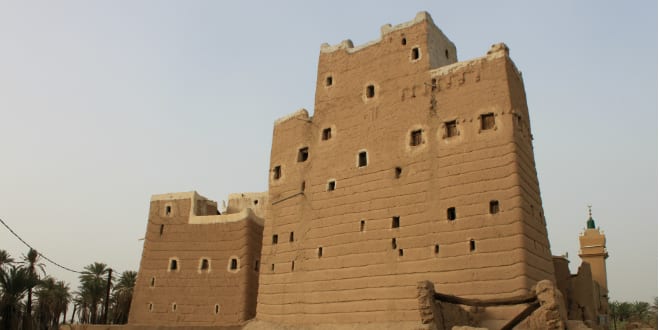 A new archaeological discovery may lead to a totally new picture of relations between the major world religions before the rise of Islam. For that very reason, it is being kept completely under wraps.

The discovery was made in Saudi Arabia in 2014 by a joint French-Saudi expedition researching rock inscriptions near the city of Najran in an area of Northern Saudi Arabia that, until recently, used to be part of Yemen. The inscriptions, carved into sandstone, were early Arab petroglyphs dating back to 470 CE.

The inscriptions used the same alphabet as earlier inscriptions found in Syria, indicating the roots of Arabic, previously thought to have originated in Saudi Arabia enmeshed with the roots of Islam, lay to the north. Strangely, this remarkable discovery was announced with little fanfare.

The report of the find, published in December by France’s Académie des Inscriptions et Belles-Lettres, was explained by Haaretz. The reason behind the ambivalence is evident even to the untrained eye. The inscription of the name, “Thawban (son of) Malik” followed by the date is unintelligible to most, but the Christian cross inscribed above it is universally understood. Further investigation shows the religious symbol to be commonly used in other engravings of the same period. This links early Arabic to Christianity 150 years before the rise of Islam.

As a result of this incredible find, archaeologists have drawn two conclusions: a significant Christian community existed in the area that is now Yemen and Saudi Arabia, and the region that gave birth to Islam was a Jewish Kingdom.

This, in itself, does not challenge any previous beliefs. It is well-known that there were many Jews in the region at the time of Muhammad and the Koran chronicles them.

A prime example was Medina, the second holiest city in Islam, founded and settled by Jews, which some say occurred after the first destruction of Jerusalem. This is a claim many Islamic scholars refute, saying the Jewish presence in Medina was negligible. According to the Koran, Muhammad initially had warm relations with the Jews, incorporating many Jewish practices into his religion, including praying towards Jerusalem. This turned into malevolence when the Jews challenged and ridiculed him. Muhammad’s rage was incensed and his newly found outright hatred for the Jews led him to lay siege to the city, killing the men and enslaving the women. In a lesson relevant to current events, the Jews surrendered without a fight after internal disputes divided them.

This new find indicates that Saudi Arabia and Yemen were areas with a rich Judeo-Christian culture and thriving communities. Islam, however, portrays Muhammad as entering a region plagued with ignorance, chaos, and pagan culture. This condition is called ‘jahilliyah’ in Islam.

Though it is true that the period immediately preceding the arrival of Muhammad was marked by plague and warfare, the recent finds show that this did not characterize the region at that time, as Islam would have us believe. Christianity and Judaism were flourishing, and the bleak picture Islam presents is an exaggeration, a metaphor used to set the stage for Muhammad’s dramatic entrance.

The archaeologists are now convinced that a dominant Himyar dynasty that flourished in Yemen from 110 BCE until 520 CE had converted to Judaism around 380 CE, when all temples to pagan gods disappeared. They were replaced by references to Rahmanan, “the Lord of Heaven” or “Lord of Heaven and Earth”. Eventually, the Himyar dominated the Arabian Peninsula until they were conquered by their Christian neighbors.

The story concludes in modern times when Saudi Arabia conquered Najran from Yemen in 1934. Approximately 600 Jews, the last remnant of the once great empire, were given an ultimatum by the local governor: leave now or the doors will be locked forever. Faced with oppressive Saudi rule, which forbids the practice of any religion other than Islam, they fled to Saada. Of the Jewish refugees, 200 continued to Aden and were rescued by Israel in Operation Magic Carpet in 1949.

Closing the chapter of Jewry in Saudi Arabia, the last of Yemen’s Jews arrived in Israel this week, leaving behind letters scratched in stone for archaeologists to decipher.