Rabbis Use The Bible To Analyze Trump

Home » Rabbis Use The Bible To Analyze Trump 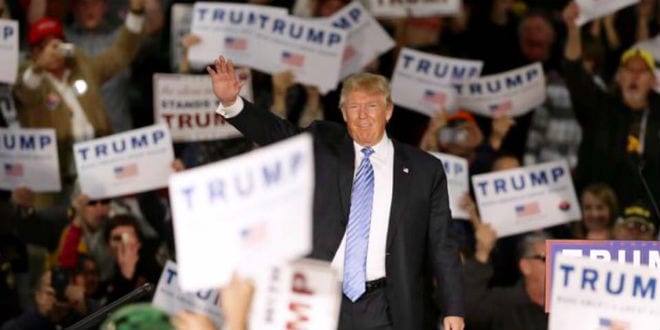 Over the past week, two rabbinic scholars spoke in Biblical terms about Donald Trump as a candidate in the US presidential race and what a Trump presidency might mean for Israel.

Author and popular lecturer Rabbi Shimon Apisdorf spoke to Breaking Israel News about the similarity between voting for Donald Trump for President of the United States and the way the Book of Esther describes the villain, Haman, choosing the day on which to exterminate the Jews of Shushan. Rabbi Apisdorf taught that, “Haman ‘cast lots’ to determine the fate of the Jewish people. It seemed as if the fate and future of the Jews was left to chance; a roll of the dice. If the dice come up one way, then X, and if they come up another, then Y.”

Rabbi Apisdorf was adamant that he was not comparing Trump to Haman. Rather, he said that trying to predict what Donald Trump would be like as president, “is like a roll of the dice, a casting of the lots. It is impossible to know what Donald Trump might be for the Jews, because Donald Trump has no clue himself. Vis-a vis Israel, Trump is a total crapshoot.

“So, on the eve of Purim, if there is one person in the world upon whom all eyes are focused (at least for a while) it’s Donald Trump. The Trump phenomenon is rolling into AIPAC. At AIPAC (American Israel Public Affairs Committee), we always want to know, or to get a sense of, a candidate’s position on Israel. With Trump, no matter what he says, we have no clue!”

According to Rabbi Apisdorf, the essential lesson of Purim is to see God’s Hand in apparent randomness. “While history and how world leaders and events impact Klal Yisrael [the Jewish people] may seem to lack any rhyme or reason, to be just a roll of the dice, a casting of the lots, the reality is, God and Am Yisrael [the Jewish nation] always, no matter how things appear on the surface, walk hand-in-hand through history. And, no matter how much it may seem like we are cast to the blind whims of leaders and events, that’s not the case. In some way, everything, everything, is leading us to geula [redemption].”

Tying the two ideas together, Apisdorf concluded his comments to Breaking Israel News by saying, “I am focusing on the fact that with Trump, one truly has no idea what you are getting. A vote for Trump, so to speak, is a vote for randomness. The celebration of Purim is also a vote, so to speak, for our faith that randomness is an illusion.”

Rabbinic scholar and popular lecturer Rabbi Mendel Kessin was more committal as he shared his Biblical analysis about Donald Trump with a live audience in Ma’ale Adumim, Israel last week. Reflecting on the qualities of the Biblical Aisav [Esau], son of Yitzchak [Isaac] and Rivka [Rebecca], Rabbi Kessin described Aisav’s personality as being two parts bad and one part good.

According to Rabbi Kessin, Aisav was arrogant and deceptive, but he also excelled at showing respect to his parents, a commandment so important that it’s listed among the Ten Commandments. Although careful to emphasize that these are his thoughts and predictions and not absolute truth, Rabbi Kessin hinted that Donald Trump is a gilgul [a reincarnation] of the Biblical Aisav.

Rabbi Kessin’s personal prediction is that Donald Trump will win the US presidential election and that, as President of the United States, he will channel the arrogance of Aisav in defense of Israel. According to Rabbi Kessin, Trump’s ego will give him the courage to stand up against the world, and his willingness to speak up in Israel’s defense will protect Israel against the Muslims.

A Trump presidency, Rabbi Kessin implied, will be the way that God will reward the United States for taking care of persecuted Jews who fled from the Eastern European pogroms and the Holocaust. Donald Trump often emphasizes his personal connection to Israel via his daughter, Ivanka, who is a Sabbath-observant Jewish woman, currently expecting her third child.

Speculating about Trump’s similarity to Biblical figures has captivated others as well. On the conservative website Townhall.com, columnist Michael Brown considered that Trump is a Persian King Cyrus type, an opinion he says is commonly expressed among Christians. Cyrus is best known for helping the Jews return to Israel and build the Second Holy Temple. Brown also posited that Trump might be a modern day Nebuchadnezzar, who destroyed the First Holy Temple and sent the Jews into exile.

Finally, in an article on Time.com, Rabbi David Wolpe, Senior Rabbi of Sinai Temple in Los Angeles and author of David: The Divided Heart, a biography of King David, strenuously objected to Jerry Falwell Jr.’s suggestion that Donald Trump is like King David. Rabbi Wolpe suggested that comparing Trump to King Rehoboam, son of King Solomon, would be more accurate.

Whichever Biblical personality he most resembles, only time will reveal if Donald Trump being a major player on the world stage today has any Biblical significance.