Hezbollah Warns Israel: We Will Hit Nuclear Sites if Attacked 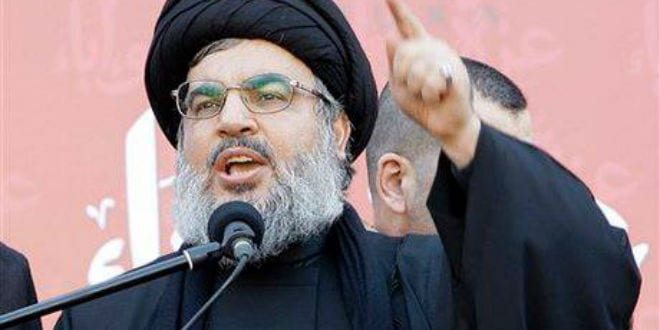 Hezbollah leader Hassan Nasrallah issued a warning to Israel Monday, saying the terrorist group would “exploit” the value Israel places on human life if the Jewish State “escalates its aggression against Lebanon”, The Times of Israel reported.

In an interview with al-Mayadeen TV, the leader of the Shiite terror group ruled out a war with Israel in the near future, but said they would know how to respond if their hand is forced.

“Hezbollah does not want to launch a war, but the resistance will employ all means to defend Lebanon in case of any Israeli aggression,” Nasrallah said, according to a translation by the Hezbollah-run al-Manar TV. “If the Israeli army escalates its aggression against Lebanon, Hezbollah will strike all the strategic targets in the occupied Palestinian territories [Israel], including the nuclear facilities.”

He claimed Hezbollah knows the location of Israel’s nuclear facilities and would have no qualms hitting them if attacked. In February, Nasrallah made similar threats against an ammonia factory in Haifa, prompting Environmental Protection Minister Avi Gabbay to announce the storage facility would be moved to the Negev.

The goal in either case would be to maximize casualties on the Israeli side.

“There will be no ceiling, limits or red lines,” he said Monday. “We can strike any target we want inside occupied Palestine.”

“Hezbollah has managed to raise its ability to inflict heavy losses upon the Israeli army during any war, which delays the occurrence of any imminent confrontation,” Nasrallah added. “The Israelis know that Hezbollah possesses rockets that can strike any position in the occupied Palestinian territories [Israel].”

According to Naharnet, Hezbollah intends to take advantage of Israel’s value for human life. “The cost is very important for Israel regarding the casualties and the psychological and economic repercussions. Israel is keen on the lives of its settlers [citizens], and this is a point that can be exploited.”

The Jewish people has always placed a premium on human life, in accordance with several Biblical exhortations on the value of every soul. The book of Genesis notes that man was created in God’s image, and in Deuteronomy, just before the Children of Israel are set to cross into the Promised Land, God urges them to “choose life”. Rabbinic wisdom teaches that one who saves a human life is considered as if he has saved an entire world, as the world was initially populated by just one couple.

Nasrallah denied Syria impacted Hezbollah’s operation in any way. “Some think that Hezbollah is preoccupied in Syria, but we have a team that is dedicated to the Israeli issue and everything the Israelis say,” he said, adding that the group had been notified in advance of Russia’s sudden withdrawal from the region last week.