Trump: “Israel Will Forever Exist as a Jewish State” [WATCH] 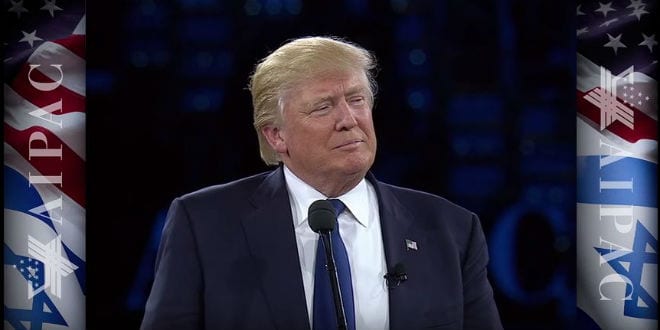 Donald Trump took the stage at the American Israel Public Affairs Committee (AIPAC) Conference on Monday afternoon in DC during which he expressed his unwavering support for the Jewish state.

Trump opened his speech declaring that he is a “lifelong supporter and true friend of Israel.” He continued saying that while he is “a newcomer to politics”, the term does not apply in regards to his relationship with the Jewish state. Trump then provided several examples of his pro-Israel sentiment, citing his financial aid and unequivocal support during Israel’s terror-ridden history.

Following his statements of absolute backing for Israel, Trump outlined his intentions for the future of “American relations with our strategic ally, our unbreakable friendship, and our cultural brother, the only democracy in the Middle East: the state of Israel.” His first priority will be to dismantle the “disastrous deal with Iran” which is “catastrophic for America, Israel, and the whole Middle East.”

The GOP front runner provided his plan to dismantle the Iranian Nuclear Deal in three stages: Firstly, “We will stand up to Iran’s aggressive push to destabilize and dominate the region.” Second, “We will totally dismantle Iran’s global terror network, which is big and powerful but not powerful like [America].” Finally, “At the very least, we must enforce the terms of the previous deal to hold Iran totally accountable and we will enforce it like you’ve never seen a contract enforced before.”

After mapping out each of the three stages and explaining in detail what perpetuated the deciding factor, Trump ended each statement with a simple message of “Believe me,” confidently reminding his audience that he is fully aware of the reality of Iran’s terror capabilities.

US President Barack Obama was the next subject of Trump’s speech, as the GOP candidate berated the President saying, “He may be the worst thing to ever happen to Israel, believe me” to which the audience responded in tumultuous applause.

Regarding a deal between Israel and the Palestinians which has been the subject of much debate throughout the current presidential race, Trump said, “An agreement imposed by the United Nations would be a total and complete disaster.” He continued saying he would employ the power of veto as president should the UN impose such a disastrous “catastrophe for Israel.”

Discussing why the UN has been thus far unsuccessful in brokering a deal between Israel and the Palestinians, Trump explained it’s because the political body does not know how to negotiate, especially when one side is facing threats to civilian lives. Further, he criticized the UN for involving itself in a matter “which it knows nothing about” due to its location thousands of miles from the conflict. He cited Palestinian terrorism as the prime cause of the current crisis in Israel, referencing American citizen and Iraq war veteran Taylor Force who was murdered by a knife-wielding terrorist during his visit to Jaffa port earlier this month. Insisting that one must stand up in the face of such threats, Trump continued saying it is up to the parties involved who must “negotiate a resolution themselves or it will never hold up” emphasizing that Israel should not have to abide by a UN-forced agreement.

Trump next revealed his ongoing relationship with Benjamin Netanyahu and declared that he will work with the Israeli Prime Minister to bring stability to the region in the face of Palestinian incitement saying that the hate speech “has to stop”. “You cannot achieve peace if the terrorists are treated as martyrs. Glorifying terrorists is a tremendous barrier to peace. It will end soon, believe me.”

Trump further criticized Obama saying “[The President] constantly applies pressure to our friends and rewards our enemies.” In a display of strong support for the Jewish state, Trump emphasized “The days of treating Israel like a second class citizen will end on day one.”

If elected president, Trump announced he will move the “American Embassy to the eternal capital of the Jewish people, Jerusalem.”

Concluding his speech on a strong note, the GOP candidate boldly pronounced that “the Palestinians must come to the table knowing that the bond between the United States and Israel is absolutely and totally unbreakable” and “willing to accept that Israel is a Jewish state and it will forever exist as a Jewish state.”