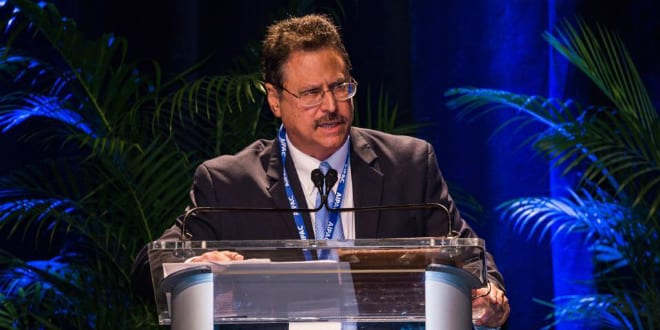 Navigating security at the Consulate General of Israel in New York requires patience, but visitors attending the recent Latino-Jewish roundtable discussion at that venue were undeterred by long lines. On the contrary, a palpable sense of enthusiasm seemed to unite the dynamic guests of varying faiths as they filed through the metal detectors.

The much-anticipated March 11 event—hosted by the National Hispanic Christian Leadership Conference (NHCLC) and its partners, the Hispanic Israel Leadership Coalition (HILC), the Conference of Presidents of Major American Jewish Organizations, and the Jewish Federations of North America—shed light on what religious leaders and diplomats alike call a “natural alliance” that is taking shape between Jews and evangelical Christians. The roundtable at the consulate capped an eventful two-day Israel Summit in New York for HILC, which was launched last year to galvanize the energy of the world’s nearly 150 million Hispanic evangelicals in support of Israel.

While waiting for the elevator, many guests reflected on the celebratory gathering that took place the previous evening, March 10, at the King Jesus Ministry in Astoria, N.Y. Several Jewish attendees expressed a shared sense of wonder for the zealous rituals and prayers they had witnessed as guests of the evangelical congregation. Feeling both welcome and appreciated, Israeli attendees now sought to show their brethren the same hospitality at the consulate.

Founded as a subsidiary and ministry of the NHCLC, HILC’s stated mission is to “engage the Latino Christians, America’s and the Western hemisphere’s fastest-growing ethnic and faith demographic, in the pro-Israel movement.” Reacting to rising anti-Semitism around the world as well as the propaganda campaign waged to undermine the legitimacy of the Jewish state, the group seeks to establish a “firewall” of activists determined to defend Israel’s reputation and the country’s right to exist.

In his opening remarks, Amir Sagie—Israel’s deputy consul general in New York—issued a stark appraisal of the current state of affairs in the Middle East. “On Israel’s northern border and in the south, we can see ISIS flags flying in Syria and Egypt,” he said. The purpose of the Israel Summit and future events, he explained, is to help HILC form a task force that can identify resources and devise effective strategies to generate support for Israel.

“We’ll work with anyone who is willing to help,” Malcolm Hoenlein, executive vice chairman and CEO of the Conference of Presidents, an umbrella body representing 50 national Jewish groups, toldJNS.org. Similar to other participants, Hoenlein is impressed by the compatibility of Jews and evangelical Christians as well as the healing tone that they have managed to strike through collaboration.

Jeff Mendelsohn, national outreach director for the American Israel Public Affairs Committee (AIPAC), observed, “Hispanics have one thing we (Jews) do not, and that is numbers.” Throughout the roundtable discussion, impressive figures were quoted, estimating the global population of Latin Americans to be in the area of 500 million.

“There are 500,000 evangelical churches in existence in the Americas,” Pastor Mario Bramnick, president of HILC, told JNS.org.

“The younger generation is seeking a more intimate experience with God,” said Bramnick, explaining why traditional Roman Catholics and others are attracted to evangelical Christianity, given its reputation for inspirational and fervent prayer rituals.

Asked what, specifically, evangelical Christians love about Israel—be it the country’s biblical past, the present reality, or whether Christians envision a brilliant future for the Holy Land—Bramnick offered a patient perspective lodged in his deep-seated respect for both New Testament and Old Testament theology. “This is a spiritual issue. We (evangelical Christians) respect the mandate that we have from Genesis I, that God gave Jews the land in a covenant to be honored in perpetuity,” he said.

Bramnick also acknowledged the fact that evangelical Christianity predicts various “end-times scenarios,” a chronology of symbolic events that presumably will usher in the Messiah in the Holy Land. The pastor is not averse to entertaining discussion of apocalyptic prophecies among his adherents, but he prefers to focus on the present challenges facing Christians across the Middle East.

“Israel is the only place in the region where the Christian community is flourishing,” he said.

Decrying any insinuation that HILC is political in nature, Bramnick said of this growing Latino-Jewish collaborative endeavor, “This is one of the great positive humanitarian efforts. We share a force for change in the world.” Israel, he reasoned, is where the evangelical community can make a profound difference.

Following opening statements at the roundtable, the large group broke up into three separate committees to discuss the specific initiatives that HILC has set in motion. These focus areas include pro-Israel advocacy; the establishment of international outreach for education and community building in Latin America; and advocacy concerning immigration, anti-bullying efforts, and the Syrian refugee crisis. The partner groups attending the summit acknowledged a humanitarian imperative to address these issues. Likewise, HILC’s leadership senses an opportunity to facilitate important conversations that can enable positive consensus among disparate religious communities, ultimately leading to conflict resolution. Many of the Israel Summit guests hailing from South American countries were eager to promote a major event scheduled for July 16-18 in Buenos Aires, Argentina, in which HILC—in coordination with the Israeli Foreign Ministry—is a convener for The Global Forum Combating Anti-Semitism, the first conference of its kind in Latin America.

Through the work of HILC and others, impassioned forces are coalescing to counter a daunting threat to the ethnic and religious heritage that Jews, Christians, and Muslims all share.

“God has a plan for Ishmael, and God loves the Arab,” Bramnick said, underlining the sensitivity that his movement expresses toward Muslims living in Israel and elsewhere. HILC has adopted an approach that seeks to re-educate communities where persistent racism and radicalization has tarnished hopes for coexistence, thereby bridging gaps of understanding between Jews and Arabs. Such an effort may take even more patience than waiting in line to pass through security, but the enthusiasm on display at the NY Israel Summit offers a sign that forward-thinking gospel is beginning to resonate.