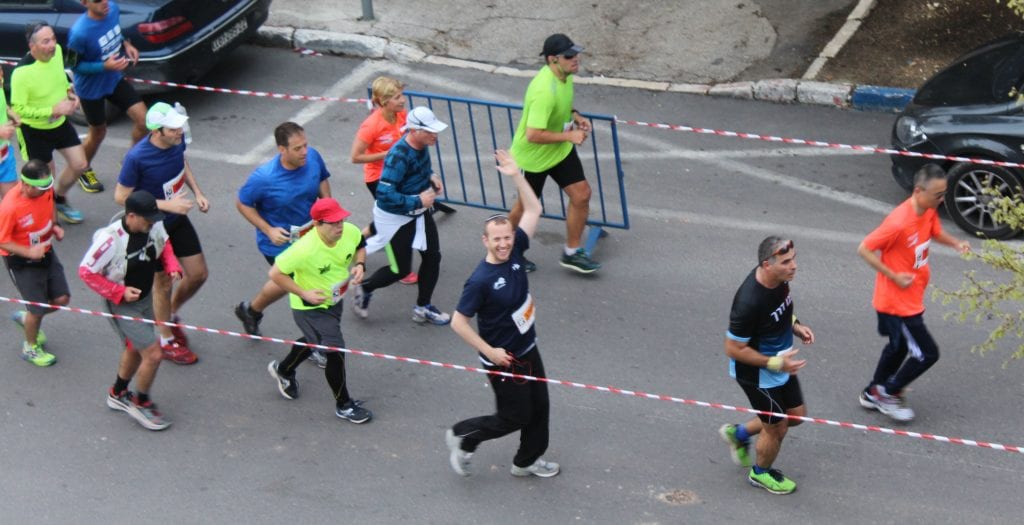 In an outpouring display of Israel pride, the staff of Breaking Israel News (BIN), in partnership with Israel365,  joined 30,000 others racing across the Holy City of Jerusalem on Friday.

Every year since its inauguration in 2010, enthusiasts from all over the world have come to Israel to  compete in the race. Participants can choose to run anywhere from five kilometers to a full marathon distance of 42.2 kilometers.

This year, BIN staff, along with friends and family, elected to run the five kilometer race (equivalent to approximately 3.1 miles).

Said Rabbi Tuly Weisz, Founder and Director of Israel365, “Running in the marathon was an incredible opportunity for us as a team to fulfill Jeremiah’s prophecy of ‘Run ye to and fro through the streets of Jerusalem’. Every single person came to express their love of Israel and the Holy City.”

Although the staff aren’t always accustomed to such rigorous physical activity, said Ariella Mendlowitz, Outreach Director for BIN, “Running with my coworkers, as well as thousands of people from all over the world, was more than enough encouragement to give me the adrenaline boost I needed to make it through.”

Said Tsivya Fox, Director of Client Relations for BIN, “Participating in the marathon was a very uniting experience. There was a real spirit of excitement as the crowds succeeded in their mission to reach the finish line.”

Gila Leipnik, Social Media Manager at Israel365, also shared her sentiments with BIN. “It gave me such a sense of hope to be part of such a positive crowd. Joining people who were all heading towards the same challenge with the same goal was very uplifting,” she said.

Echoing his love of the Holy City, Israel365’s Director of Business Development Shlomo Schreibman related: “Having grown up in Jerusalem, it was an amazing experience to come back and see the old streets renewed.”

Approximately 25,000 local athletes participated in the event and an additional 2,500 came from 61 countries to participate in the sixth annual race. The winner of the full marathon was a 25-year old Kenyan man who completed the race at an incredible time of 2:16:233.