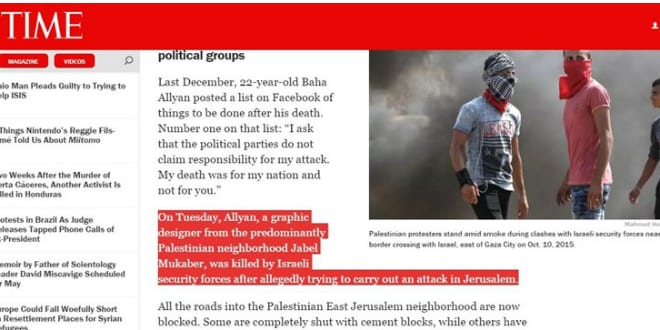 After a five month battle led by the Israeli Government’s Press Office, TIME Magazine has finally corrected a biased article it published describing a terrorist as an innocent victim of Israeli Security forces.

On Friday, TIME Magazine updated an article published in October about an attack in Armon Hanatziv in Jerusalem.

A security guard on the bus was able to shoot one terrorist but the other locked the doors. Police shot the two terrorists, Bilal Abu Ghanem and Bahaa Allyan, through the windows. Allyan died while Ghanem was taken into custody.

Two days after the deadly attack in October, TIME Magazine published a story titled “The Desperation Driving Young Palestinians to Violence”. The original article described Allyan as “a graphic designer” who “was killed by Israeli security forces after allegedly trying to carry out an attack in Jerusalem”. It did not mention the attack or victims.

The GPO tried several times to convince the magazine to correct its biased and inaccurate reporting of the attack but five months later, the magazine still refused to do so. GPO director Nitzan Chen told Times of Israel that the office had resorted to publicly shaming TIME as it had lost patience for “completely distorted media reports… We decided we would no longer be silent.”

It seems that public shaming is effective. On Friday, the article was updated on TIME’s website with the explanation, “This story has been updated to give a fuller account of the attack”.

The article now states that Allyan was, “killed by Israeli security forces after he and another assailant killed two passengers in an attack on a Jerusalem bus. A third victim, a U.S.-born teacher, died two weeks after the attack.”

The rest of the article is unchanged, justifying Palestinian violence, blaming Israeli policies. It concludes, “Palestinian youth are looking for a new way to fight for their cause”.

Victims of the attack expressed their outrage on the YNet website. Maya Rachimi, injured in the attack, was outraged by Allyan being described as a graphic designer.“I had no idea that leaving me with two scars on my body and a punctured lung — after stabbing me with a 20cm-long knife — was professional artwork, not terrorism.”

Micha Avni, Richard Lakin’s son said, “Those who cannot call terrorism — terrorism, and condemn the murder of Israelis as well as American citizens, are part of the problem, and are inciting to terrorism by staying silent.”

The two attackers were supporters of Hamas and Ghanem told investigators they were motivated by “intrusions in al Aqsa”, the mosque on the Temple Mount in Jerusalem.