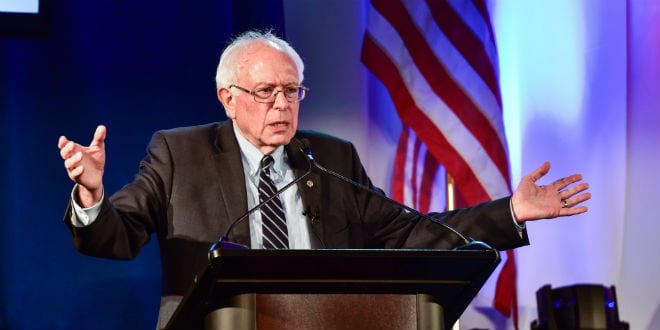 Bernie Sanders has announced that he will not attend the Washington conference of the pro-Israel lobby group AIPAC, thereby making him the only presidential candidate to do so. Some have conjectured it may be a sign he is pandering to constituents who want an anti-Israel candidate.

In a letter he sent Friday afternoon to Robert Cohen, President of the American Israel Public Affairs Committee (AIPAC), Sanders cited conflicting campaign commitments, saying he was, “going to be travelling throughout the West”.

While GOP candidates do have a packed campaign schedule, presidential hopefuls Donald Trump, Hillary Clinton, Ted Cruz, and John Kasich all plan to attend the event. Sanders’ absence therefore brings into light rumors that there may be other reasons for his skipping the conference.

Sanders promised to provide a copy of the speech he would have given to the 18,000 participants of the conference. Sanders noted that AIPAC no longer offers candidates the option of addressing the conference remotely or by satellite, as they have done in the past, such as Republican candidates Mitt Romney and Newt Gingrich in 2012.

“We invited the Senator and we gave him the same opportunity to speak as the other candidates,” an AIPAC official told JTA in an email. “We understand that he very much wanted to come but could not get back from West Coast to do it. We did change our policy and no candidate was offered/permitted the opportunity to address the conference remotely this year.”

Sanders has been under pressure from his supporters to skip the pro-Israel conference. Two petitions being distributed by change.org and diy.rootsaction.org, both initiated by anti-Israel activist Max Blumenthal, have garnered over 18,000 signatures.

The petitions state: “AIPAC…this year will feature Islamophobes, anti-immigrant activists,and religious extremists. With his promise to seek a ‘level playing field’ on Israel-Palestine, Bernie does not belong on the same stage as these figures.”

Max Blumenthal is the son of Sidney Blumenthal, a long time advisor of Hillary Clinton known for extremely anti-Israel views, and has been accused of being anti-Semitic.

It is ironic that Sanders, the first Jew to win a presidential primary, would skip the conference of the powerful Jewish lobby group. In the past, Sanders was criticized by left-wing groups for supporting Israel’s right to exist and for criticizing Hamas. He has recently changed his rhetoric when addressing the subject, most notably while recently campaigning in Michigan which has a large Muslim population. Sanders won the primary in that state.

Max Blumenthal was clearly pleased at Sanders decision, telling IBT that the intention of the petitions was to convince Sanders to pass on attending. He stated that Sanders’ supporters object to “the blind special relationship between the U.S. and Israel”. Boycotting the pro-Israel rally will only bolster support for the Jewish candidate, according to Blumenthal.

“He’s tried to avoid the Israel-Palestine issue like the plague,” said Blumenthal. “I wanted to give people a vehicle for showing Bernie Sanders that they support him for not attending. That he has an army behind him.”

Blumethal upped the ante in an interview with Salon, saying that the petitions’ success was a clear sign that Sanders was responding to his supporters and changing his policy of a “level playing field” in Arab-Israeli relations.

“Regardless of any spin he’s offering, I think Sanders recognized that sharing a stage with bigots at AIPAC and apartheid lobbyists would be anathema to his hardcore base of support, “Blumenthal told Salon. “This is a demonstration of the growing grassroots impact of Palestine solidarity and a sign of things to come in the future: self-styled progressive politicians will be punished for supporting Israeli apartheid.”