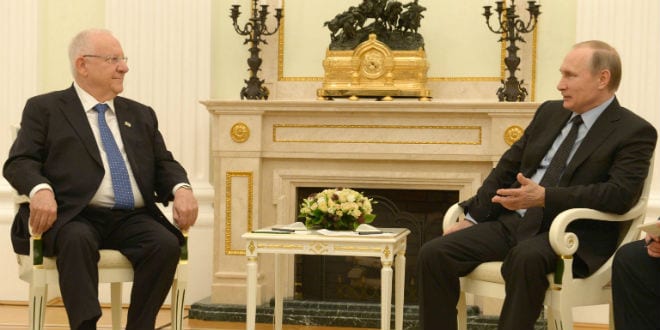 President Reuven Rivlin’s visit to Moscow this week looks to be another sign of growing cooperation between Israel and Russia. It also comes against the backdrop of Russia’s military withdrawal from Syria, announced earlier this week, But while that withdrawal may bring change to Syria, the Israeli-Russian relationship looks likely to emerge as strong as ever, Israeli experts said.

“The visit shows that Israel-Russia relations are good as a whole, in comparison to the past,” Dr. Ofer Israeli, an international defense policy expert at the Interdisciplinary Center, Herzliya, told Tazpit Press Service (TPS).

Much of this is due to Russia’s recognition of Israel as an oasis of stability in the Middle East.

“When Russia looks at the Middle East, it doesn’t see many stable regions besides Israel,” Dr. Israeli explained to TPS. “So from a Russian perspective, Israel is relatively predictable and can be coordinated with, which is in Russia’s interests.”

Russia is also aware of Israel’s strategic importance in the Middle East. “Russia also recognizes that Israel plays a significant role in the region with its military strength,” Dr. Israeli added.

Most importantly, Israel and Russia are no longer automatically placed on opposite sides in geopolitical struggles.

“Israel and Russia are not on two different sides of their political and strategic battle anymore,” noted Professor Zeev Khanin, who teaches in Ariel University’s Department of Israel and Middle East Studies and is an expert on Russian affairs.

During the Cold War, the Soviet Union traditionally backed Israel’s Arab adversaries, and Israel found itself in the American axis. But now, some suggest that Russia is friendlier with Israel than with most Arab countries.

At the same time, Professor Khanin urges against overestimating the improvement in Israeli-Russian ties.

“We should not exaggerate, and we should not overestimate,” Khanin stressed to TPS. “There is no strategic partnership between Russia and Israel. But there is a sort of normal cooperation on issues on which we agree, and no cooperation on other issues.”

According to Professor Khanin, the environment of cooperation was created in large part as a result of efforts by Prime Minister Benjamin Netanyahu and former Foreign Minister Avigdor Lieberman, an immigrant from the former Soviet Union.

“Fortunately, the previous government was able to create a background for founding a mutual understanding in a situation where Russian troops will be there,” said Khanin.

That foundation of mutual understanding allowed for Russia to take Israel’s interests into consideration in preventing Iran from opening a front against Israel in the Golan Heights through its proxy fighters in Syria, suggested Professor Khanin.

“It was agreed that in any solution and future settlement in Syria, Russia would insist that the interests of Israel be taken into consideration,” Khanin explained to TPS. “Also, Russia did not mind if we struck the transfer of armaments to Hezbollah as long as we did it outside of Syrian territory.”

“These understandings actually helped us to control or watch carefully and to adapt ourselves to the situation in Syria without being a part of the conflict, which was why we didn’t make any noise when the Russians deployed their S-400 anti-aviation defense system located in Syria” noted Khanin to TPS.

Ultimately, Khanin believes Israel and Russia recognize each other’s interests. “Russia understood that we are unable to permit the transfer of armaments to Hezbollah, and Israel understood that the S-400 system was there in order to defend Russian interests, their seaport, their military fleet, and their troops,” explained Khanin.

However, Dr. Israeli stressed that important issues remain unresolved. “The Russian activity in Syria strengthened radical Islamist bodies, including Iran and Hezbollah,” noted Israeli. “Neutralizing this threat after Russia’s retreat will be a challenge.”

Michael Bachner and Alexander J. Apfel contributed to this article.