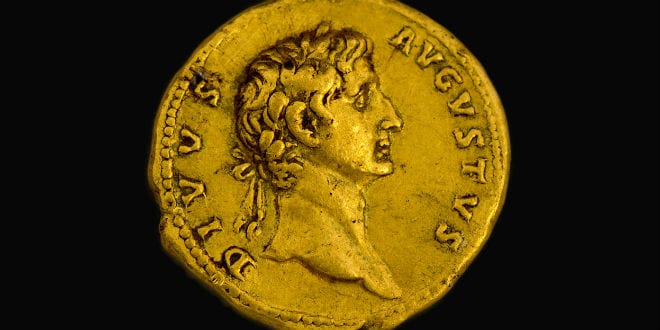 Kibbutz Kfar Blum resident Laurie Rimon discovered a rare gold coin bearing the image of Emperor Augustus in the eastern Galilee. The coin was handed over by Rimon to the Israel Antiquities Authority (IAA).

“It was not easy parting with the coin,” said Rimon after donating the coin. “After all, it is not every day that one discovers such an amazing object, but I hope I will see it displayed in a museum in the near future.”

The IAA will award Laurie a certificate of appreciation for turning over the coin. “Laurie demonstrated exemplary civic behavior by handing this important coin over to the Antiquities Authority,” exclaimed Nir Distelfeld, an inspector with the IAA’s Antiquities Robbery Prevention Unit. “I believe that, thanks to Laurie, the public will soon be able to enjoy this rare find.”

The public is generally requested to notify the IAA when ancient artifacts are found. “It is important to know that when you find an archaeological artifact, it is advisable to call IAA representatives to the location of the find in the field,” added Distelfeld. “That way, we can also gather the relevant archaeological and contextual information from the site.”

The coin dates back to 107 CE and is one of many other coins minted and dedicated by Emperor Trajan to his predecessors, but it is distinguished by its unique design.

“There are symbols of the Roman legions next to the name of Emperor Trajan on one side and there is an image of the emperor known as Divus Augustus on the other side instead of an image of Emperor Trajan, as would usually be the case,” explained Dr. Danny Syon, a senior numismatist at the IAA.

Dr. Donald T. Ariel, head curator of the IAA’s coin department, made note of the rarity of a find of any of Emperor Trajan’s gold coins in the region.

“While the bronze and silver coins of Emperor Trajan are commonly found throughout the country, his gold coins are extremely rare,” said Dr. Ariel. “Only two other gold coins from this emperor have ever been registered in the National Treasures Department. One of those coins was found in Givat Shaul in Jerusalem and the other was found in the Qiryat Gat region, and the details on both of them are different than those that appear on the rare coin that Laurie found.”

Dr. Ariel believes that the rare coin might trace back to the presence of the Roman army in the region that suppressed the Second Jewish Revolt against the Romans led by Bar Kokhba almost 2,000 years ago, but that “it is very difficult to determine that on the basis of a single coin.”

“Historical sources describing the period note that some Roman soldiers were paid a high salary on each payday of three gold coins, the equivalent of 75 silver coins,” he added.

The coin is being referred to as an “identical twin brother” to the only other coin of its kind discovered that was minted by Emperor Trajan and that bears the image of Emperor Augustus. The “twin brother” is currently being preserved at the British Museum in London.