Putin: Our Mission in Syria is Complete

Home » Putin: Our Mission in Syria is Complete 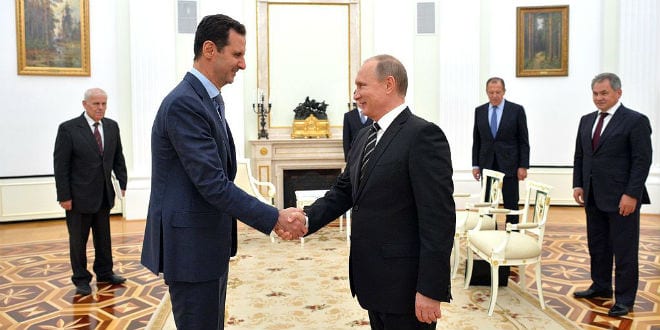 In a move that shocked the West, Russian President Vladimir Putin on Monday ordered the Defense Ministry to withdraw Russian forces from Syria.

Russia had initially intervened in Syria in September in an effort to fight the ongoing civil war and restore power to President Bashar al-Assad. The war, which has plagued the region since 2011, has resulted in an estimated 250,000 civilian deaths and approximately eleven million refugees and displaced persons, according to a UN report.

The Kremlin announced that Putin had called Syrian President Bashar al-Assad to inform him of the plans to extract Russian forces, a move which signals the culmination of Russia’s major efforts to intervene in Syria’s conflict. A longtime Syrian ally, Putin’s intentions were to defeat radical Islamic terror in the region and restore power to Assad’s crippled regime.

Putin’s confidence that the initial tasks Russia set out to accomplish were completed successfully sparked the surprising announcement to withdraw from Syria. “The task that was set before our Defense Ministry and armed forces has as a whole been completed and so I order the Defense Ministry to from [Tuesday] start the withdrawal of the main part of our military contingents from the Syrian Arab Republic,” Putin told Defense Minister Sergei Shoigu.

Reinforcing the President’s statements, the Kremlin declared Russia’s successes in the region in a statement saying “[Putin and Assad] noted that the actions of the Russian airforce allowed to radically change the situation in the fight against terrorism”.

“Assad noted the professionalism, courage and heroism of the officers of the Russian armed forces that took part in the military operations and expressed deep appreciation to Russia,” the Kremlin statement continued.

Russia’s honorable actions in coming to the aid of an ally by rescuing the war-torn country in its time of desperation is praised in the Bible, which teaches the importance of not turning down your brother when he cries out for help: “Thou shalt not see thy brother’s donkey or his ox fallen down by the way, and hide thyself from them; thou shalt surely help him to lift them up again.” (Deuteronomy 22:4).

In accordance with Putin’s command, the withdrawal began Tuesday morning when a group of Russian military planes on Tuesday left their base in Syria for their “permanent bases on the territory of the Russian Federation,” the defense ministry said in a statement.

Putin and Assad agreed that Moscow would continue to maintain an air force facility, albeit a limited one, in Syria in order to monitor the progress of the recently announced ceasefire, which was introduced on February 27. The ceasefire has, for the most part, held despite initial cautious and skeptical reactions.

Meanwhile, Russian media countrywide are hailing the withdrawal as signs of tremendous success. Reported Kommersant, a Russian newspaper: “By announcing the withdrawal, Moscow has serious grounds to present the Syrian campaign as [a] victory.” Additionally, the pro-Kremlin Izvestia daily said, “Russia is setting an example of a peaceful approach to settling conflict.”