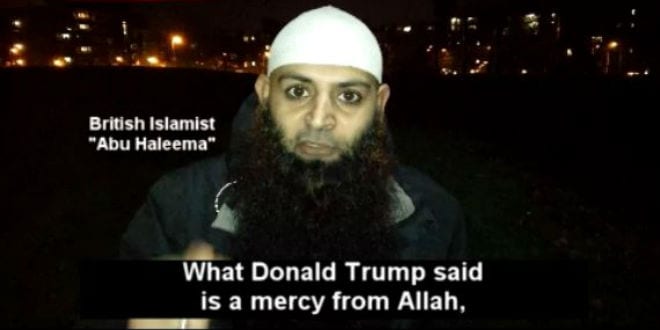 British Islamist Abu Haleema, who has been previously arrested on suspicion of terrorist activity, recently “endorsed” Donald Trump for president, saying that he would rather have Trump than a “snake” like President Barack Obama.

In a recent video released by The Middle East Media Research Institute (MEMRI), Haleema, as well as several other British Muslims, said that Trump’s blatant hatred of Islam and Muslims was preferable to those that give lip service to the Muslim community.

“What Donald Trump said is a mercy from Allah, because it took a taghout infidel like that to let you people know that they don’t like you, that they don’t want you in their lands,” Haleema said, addressing American Muslims. “I’d rather have him tell us that than someone like Obama, a snake that hides it.”

The snake is an infamous Biblical figure, whose trickery in the Garden of Eden led to an association with deceit, deception, lies, and malice which continues until this day.

“They hate you, they hate you and that’s the truth,” Haleema added passionately. “When are you going to wake up and realize that?”

Haleema, an Islamic activist and preacher, had his passport seized by British authorities in 2014 to prevent him from traveling to Syria, where the Home Office believed he planned to engage in terror-related activities. In 2015, he was arrested by the Counter Terrorism Command on suspicion of terror activity, and his Twitter account was suspended.

Haleema included British Prime Minister David Cameron among the deceptive “snakes” who secretly hate Islam, saying he’d prefer to Trump to “someone like Cameron who comes on Eid and gives messages to the Muslims. Some infidel like that, who tries to hide his hatred.”

Haleema said Trump’s polemical rhetoric would mobilize American Muslims by “[reminding] all of you that they hate you.”

Another Muslim interviewed agreed, saying, “I think that it would actually be quite good if he got voted in, because maybe then, the American Muslims would wake up.”

A third man interviewed echoed Haleema’s appreciation for Trump’s honesty. “At least with Donald Trump you know where you stand. He makes it clear where you stand, rather than Obama, who gives you a smiley face, and then he stabs you in the back.”

However, he added, “I’m not encouraging people to vote for him, because we don’t believe in democracy as Muslims, and we reject all of those candidates and their system.”

Several of those interviewed took the opportunity to warn the infidel Trump that if he does not accept Islam, he will burn in hell.

“He is showing his enmity, his hatred, and his animosity against Islam,” said one of the interviewees. “We are seeing how he is free to insult other people, how he is free to demonize those he disagrees with. If he does not repent, he will abide in the hellfire forever.”

“His money and Trump Towers are not going help him in the least [in the hellfires],” added another.