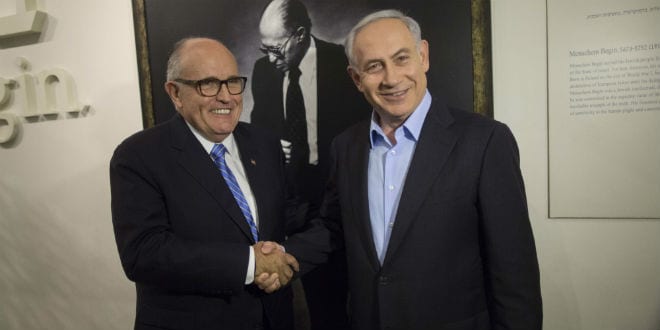 The World Jewish Congress and the Israel Council on Foreign Relations hosted former New York City mayor Rudy Giuliani in Jerusalem on Sunday. Giuliani praised Israel’s resilience during the 1990s surge of Palestinian terror attacks on buses in a speech to an audience that included Jerusalem Mayor Nir Barkat, Israeli Minister for Social Equality Gila Gamliel, and the director-general of the Prime Minister’s Office, Eli Groner.

Israeli resilience helped him lift the moral of New Yorkers following the September 11, 2001 terror attacks, Giuliani said. “I came to Israel thinking I would lift morale, but I came back uplifted,” he said.

Giuliani said that America “should be 100 percent behind” Israel because the Jewish state is “fighting our battle on the front lines against Islamic terrorism.”

“It is almost unpatriotic not to love Israel,” Giuliani said.

Giuliani is “a man of courage, conviction, and truth,” Groner said.

Separately, in an interview with Israel Hayom, Giuliani commented on Republican presidential primary front-runner Donald Trump, telling the newspaper that he is a “friend” and informal adviser for the candidate.

“Sometimes he listens to me and sometimes he doesn’t, but he always takes my words into account,” Giuliani said, agreeing with Trump’s position that “Americans are disappointed, angry, and very depressed.”

“The economic recovery has been anemic…I think Americans do not like to see our country being dragged along,” said Giuliani. “We did not take a strong position to help [ousted Egyptian leader Hosni Mubarak] and we toppled [the late Libyan leader Muammar] Gaddafi. What do we have now in Libya? A haven for terrorists. We lost four Americans, including our ambassador, and we still don’t know where the president and Hillary Clinton were when that happened. America is used to being the leading country in the world. We are proud of that because we think we’re a good country and we think we offer better solutions than do Iran, Russia, or China. If we don’t do that, they move in. [During Obama’s time in office] we’ve weakened our country and our economy. We want someone completely different.”