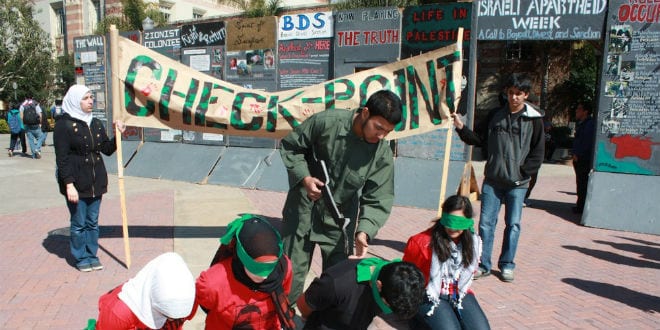 The study, conducted by the anti-Semitism watchdog group AMCHA Initiative, investigated anti-Semitic activity on more than 100 public and private colleges and universities over the duration of one year. Previous surveys commonly assessed levels of campus anti-Semitism by measuring student attitudes and subjective reports. According to AMCHA, this study assessed anti-Semitic activity by focusing on confirmed incidents compiled from media reports and eyewitness accounts. The campuses selected to be surveyed have the largest Jewish undergraduate populations in the country.

According to the study’s executive summary, three different kinds of activity were analyzed: “anti-Semitic expression,” meaning incidents with language or imagery that used one or more of eight tropes included in the U.S. State Department definition of anti-Semitism; “targeting of Jewish students,” meaning incidents involving behavior that targeted Jewish students for particular harm including physical assault, harassment, destruction of property, discrimination, and suppression of speech; and “BDS activity,” meaning the promotion or endorsement of an anti-Israel boycott, divestment, or sanctions effort. Campus BDS campaigns routinely employ rhetoric and imagery intended to demonize and delegitimize Israel, expression that is consistent with the State Department definition of anti-Semitism.

“No student should ever be targeted for harm because of his or her perceived religious or ethnic identity, and yet, at far too many schools, Jewish students are routinely threatened because of their identity,” said Tammi Rossman-Benjamin, AMCHA’s director. “These findings provide, for the first time, objective confirmation of student reports of widespread anti-Semitism, as well as evidence that the primary agents of anti-Semitic activity are anti-Zionist students and faculty boycotters and BDS is the strongest predictor of anti-Jewish hostility on campus.”

Schools such as Vassar College, Oberlin College, and the University of Illinois at Chicago have recently made headlines due to alleged anti-Semitic activity. Vassar an Oberlin have found the spotlight due to anti-Semitic behavior of speakers and professors, respectively. All three schools were in the AMCHA study’s top 18 schools in terms of reported incidents of bigotry toward Jews.

The study also revealed that 81 percent of colleges with one or more BDS advocates among the faculty had at least one incident of anti-Semitic activity, while 17 percent of schools with no faculty boycotters of Israel had incidents of anti-Jewish activity.

AMCHA’s survey concludes that the strongest indicator of campus anti-Semitism stems from campuses with anti-Israel advocacy groups such as Students for Justice in Palestine and faculty members that endorse boycotting the Jewish state.