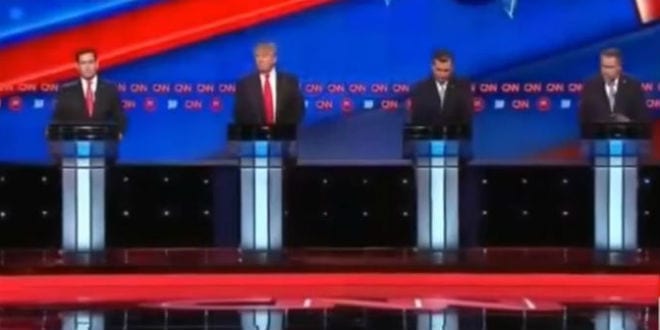 In the latest Republican presidential debate on Thursday, businessman Donald Trump fielded criticism from Sens. Ted Cruz (R-Texas) and Marco Rubio (R-Fla.) on Trump’s previous assertion that he would remain “neutral” on the Israeli-Palestinian conflict.

In his criticism of Trump, Cruz mentioned Vanderbilt University graduate student and Texas native Taylor Force, who was killed by a Palestinian terrorist in Jaffa while he was visiting Israel this week.

“As president, I will not be neutral. And let me say this week, a Texan, Taylor Force—he was an Eagle Scout, he was a West Point graduate, he was an Army veteran. He was murdered by a Palestinian terrorist this week in Israel, and I don’t think we need a commander in chief…who is neutral between the Palestinian terrorists and one of our strongest allies in the world, the nation of Israel,” Cruz said.

Trump defended his position, saying that “first of all, there is no body on this stage who is more pro-Israel than I am. I happen to have a son-in-law and daughter who are Jewish….[but] I think if we’re going to ever negotiate a peace settlement, which every Israeli wants, and I’ve spoken to the toughest and the sharpest, they all want peace, I think what would be much more helpful is—I’m a negotiator. If I go in, I’ll say I’m pro-Israel and I’ve told that to everybody and anybody that would listen. But I would like to at least have the other side think I’m somewhat neutral as to them, so that we can maybe get a deal done. Maybe we can get a deal. I think it’s probably the toughest negotiation of all time. But maybe we can get a deal done.”

Cruz then doubled down on his position that neutrality is ill-advised when it comes to the Israeli-Palestinian conflict. “The reason we are friends and allies with Israel is they are a liberal Democratic country that share our values, they’re our strongest ally in the region. We get billions in intelligence resources, billions in military resources. And the Palestinian Authority that Donald, along with Hillary Clinton and Barack Obama, say they want to treat neutrally, the same as Israel, that Palestinian Authority is in a unity government with Hamas, a terrorist organization,” he said.

Rubio, similarly, said that “there’s no one to negotiate with” when it comes to this conflict.

“The Palestinian Authority is not interested in a serious deal and they are now in union with Hamas, an organization whose specific purpose is the destruction of the Jewish state. Every time that Israel has turned over territory of any kind, be is Gaza, or now in Judea and Samaria, it is used as a launching pad to attack Israel. And that’s what will happen again. These groups are not interested in a deal with Israel. What they are interested in is ultimately removing the Jewish state and occupying its entire territory,” he said.

Gov. John Kasich (R-Ohio) expressed his gratitude that the U.S. has helped Israel fund the Iron Dome missile defense system so that Israelis “can protect themselves against all the missiles that [are] flying in. Could you imagine living in like Miami here and having people shooting missiles in?”

Kasich reiterated Rubio’s view that true peace is not currently possible in the region.

“The Palestinians now, Hamas in particular, is digging these tunnels trying to get under Israel. They’re coming at them from above, they’re trying to come at them under the ground. And I just have to tell you this, I don’t believe there is any long-term permanent peace solution. And I think pursuing that is the wrong thing to do. I believe that every day that we can stability in that region by supporting the Israelis and making sure they have the weapons and the security that they need with our 100 percent backing is the way to proceed in the Middle East in regard to Israel,” he said.