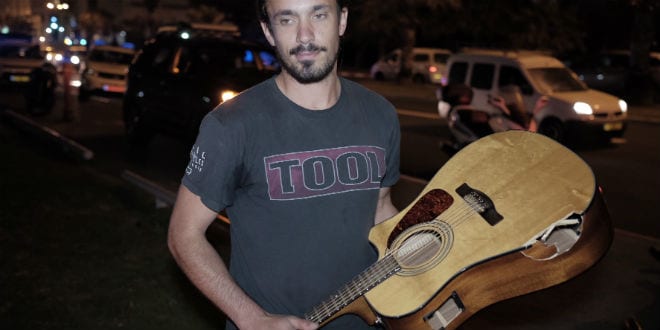 Yishay Montgomery, a 26-year-old street performer, was playing for money on Jaffa’s beachfront promenade when he came face to face with a terrorist on a stabbing spree. Without thinking twice, the young musician grabbed the first thing he had, his own acoustic guitar, and engaged the stabber.

“I just grabbed the neck of my guitar and rammed it into the guy’s face. It disoriented him a little, and he started to run away. I felt I had to end this incident and started chasing him down, hitting him with my guitar and yelling ‘terrorist, terrorist’ until security forces showed up,” Montgomery told Tazpit Press Service (TPS).

The incident occurred on Tuesday night, March 8, when a 22-year-old Israeli Arab from Qalqilya went on a lethal stabbing spree that claimed the life of a 29-year-old American tourist and ended with 11 wounded.

When the terrorist started his rampage, Yishay Montgomery was busking on a bench in Jaffa Port, entertaining pedestrians with his music.

“I was playing my guitar and didgeridoo together, making my own compositions and improvisations as I usually do. I really love doing this in Jaffa because of its magical atmosphere, especially at sunset,” Montgomery recounted to TPS. “Suddenly, I heard people screaming and saw crowds running around in panic. Then a young man in a gray shirt comes out of that crowd, running toward me with a big knife in his hand.”

According to Montgomery, the attacker quickly jumped on the bench where he was playing. The first try at stabbing Montgomery failed, with the stabber missing his target. Montgomery fell back, putting distance between himself and the terrorist. He then gripped his guitar and swung, landing a direct hit to the terrorist’s head.

“I didn’t have many options. I only had the guitar at hand, and that’s what I used,” Montgomery told TPS.

“Sadly, the guitar has now finished its life as a musical instrument. She went through a real ordeal and was damaged beyond repair. But she saved my life,” he added.

WATCH: Yishai Montgomery was playing guitar on the beach in Jaffa when he saw a terrorist stabbing bystanders. Instead of running, he decided to fight back.Hear one hero’s amazing story.—-> Demand ACTION against Palestinian terror. Add your name to IsraelIsUnderAttack.com

Posted by The Israel Project on Wednesday, March 9, 2016

Montgomery’s ordeal did not end there. He chased the fleeing terrorist, leaving his money and equipment behind, until police forces appeared and put an end to the incident.

“I was doing all this while still in a state of utter shock, and I was shocked to be in this situation in which I am hitting a man over the head with my own guitar. It was the most punk rock thing imaginable,” Montgomery said.

Yishay, who is a fan of the American Heavy Metal band TOOL, was wearing the band’s T-shirt during the incident. The incident drew the band’s attention and later they posted about it in their official Facebook page.

A Tool fan and his guitar in the news.https://www.usnews.com/news/world/articles/2016-03-08/israel-palestinian-woman-tries-to-stab-officers-is-killed