One Year After Obama’s Famous Snub, Netanyahu Snubs Back

Home » One Year After Obama’s Famous Snub, Netanyahu Snubs Back 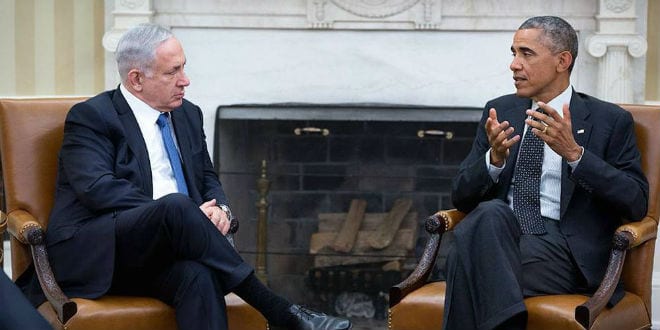 In what might appear to be the latest in a tit-for-tat war between two powerful world leaders, Israeli Prime Minister Benjamin Netanyahu has turned down a meeting with US President Barack Obama, The Times of Israel reported Tuesday. The move comes one year after Obama refused to meet with Netanyahu during the latter’s uncoordinated speech before Congress regarding the Iran nuclear deal, which took place ahead of Israeli elections.

What makes matters even more tense is that the White House claims it only heard of the cancellation via media reports. Israeli reports claiming the meeting was scuttled by the inability of the two sides to find a suitable time were also rejected by the White House as “false”.

Netanyahu was expected to attend the annual American Israel Public Affairs Committee (AIPAC) conference later this month, but rumors had been circling for over a week already that the Prime Minister would skip the event due to Obama’s travel schedule.

The AIPAC conference is set to take place March 20-22, but Obama has an historic trip to Cuba scheduled for March 21. Continuing from there to Argentina, the president will only return to the US March 25.

However, in a desire to accommodate the Israeli prime minister, the White House proposed a meeting on March 18, before Obama’s trip, as early as two weeks ago.

“We were looking forward to hosting the bilateral meeting, and we were surprised to first learn via media reports that the prime minister, rather than accept our invitation, opted to cancel his visit,” White House National Security Council spokesperson Ned Price said in an emailed statement.

“Reports that we were not able to accommodate the prime minister’s schedule are false,” he added.

A senior Israeli official shared the reasons Netanyahu’s trip was cancelled with The Times of Israel.

“At the moment, it looks like we’re not going to Washington,” the official told the paper. “The thinking is that we’re seeing (Vice President Joe) Biden this week and the assumption is that in the discussion with Biden all the issues will come up.” Biden arrived Tuesday for a brief visit to Israel.

Echoing the excuses offered last year by Obama for avoiding a meeting with Netanyahu ahead of Israeli elections, the official added, “Also, at AIPAC, many of the presidential candidates are giving speeches and might ask for meetings with the PM. We don’t want to get involved in the US election process.”

Netanyahu will instead address the conference participants via satellite.

Last year, Netanyahu accepted an invitation to address Congress regarding the Iran nuclear deal, then still under negotiation. The speech was not coordinated with the administration, a political gaffe which caused a backlash. Later, Obama announced he would not be meeting with Netanyahu during the trip, not wishing to influence the Israeli elections which were taking place shortly thereafter. It now seems the tables have turned, in keeping with the Biblical imperative, “an eye for an eye” (Exodus 21:24).