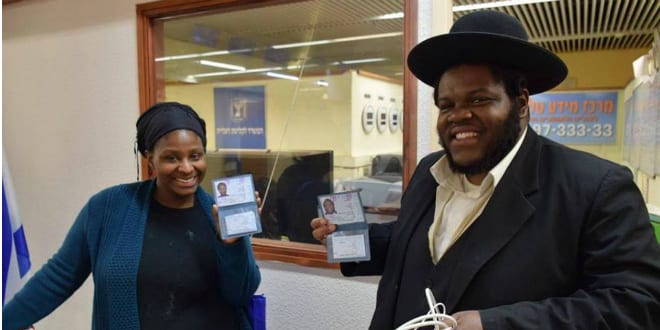 Nissim Baruch Black, the rapper formerly known as Damian Black, made Aliyah to Israel on February 24th with his wife and five children. Black and his wife Adina came as part of  a Nefesh B’Nefesh group of 26 olim (immgrants).

Black converted to Judaism about three years ago and moving to Israel was something he dreamed about since then.

“It feels amazing to be here and finally realize the dream,” he said in an interview with Ynet. “It’s crazy to see my children here, because the first time I was in Israel I was alone, and now sharing the experience with my family is much more important to me.”

Black was raised in the Seattle area by his grandfather, a Sunni Muslim, but converted to Christianity at the age of 14 after his grandfather was sent to jail. After the release of his debut album, The Cause and Effect, he began a spiritual search which led him to question Christianity. He named his second album Ali’yah, which went to number four on the hip-hop charts. Six months later, Black stopped performing on the Sabbath and left Christianity.

Black will be living in Jerusalem and will continue making music.  He has already collaborated with Israeli musician Gad Elbaz on the song, Hashem Melech 2.0 (“God is King”), which has received over one million views on YouTube.

After landing at Ben Gurion Airport in Tel Aviv, Black told YNet, “The last piece missing to complete the puzzle of my life — the land of Israel. . .God, Israel, and the Jewish people are one comprehensive unit, so when you have one piece without the others, it’s an incomplete puzzle.”

Music and Torah are clearly a part of the plan.

“We’re going to shoot a new video clip in Safed and Tiberias for my new song ‘Zman Cheiruteinu’,”  Black siad. “Then I have a concert with Gad Elbaz and and a concert in March at Brooklyn College, and I definitely plan to go back and tour the United States.”