Syrian Ceasefire or Case of ‘Hear No Evil’?

Home » Syrian Ceasefire or Case of ‘Hear No Evil’? 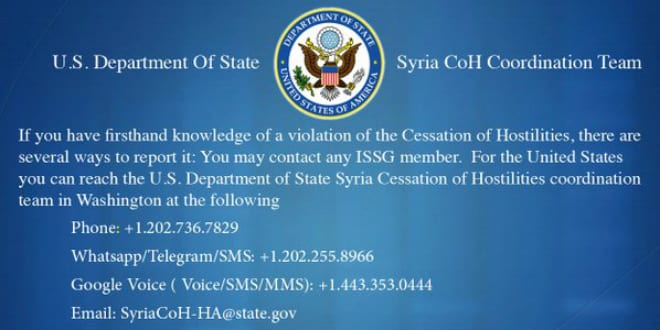 The US State Department’s claim of a successful ceasefire in Syria may be bolstered by the absence of Arabic speaking operators on the hotline intended to receive civilian reports of violations.

The glitch was reported by Syria Direct, a nonprofit media organization, whose director, Orion Wilcox, called the hotline 45 minutes after the ceasefire took effect on midnight, Saturday night.

“I didn’t expect an American to answer; he answered in English but switched to Arabic. I started telling him in Arabic about reports we were getting from Homs province of specific ceasefire violations.”

“The person monitoring the hotline only asked where the incidents were happening.”

“He’s really struggling and can’t understand me,” said Wilcox. “I’m like, why is this American guy on the phone who can’t speak Arabic? I’d give a detailed account of something happening in Homs province and he would listen and his answer was: ‘Homs.’ That’s it.”

Syria Direct added: “Wilcox said he finally switched to English and asked the hotline monitor how he could effectively document events without understanding all the Arabic. The operator answered that other people were working the hotline, declined to comment further and hung up.”

The Washington Post reported on Wednesday that the hotlines are recording “a near-constant flow of accusations, ranging from reports of small-arms fire to shelling and airstrikes”.

“So far, none of the violations have been publicly verified by the U.S.-Russia task force assigned to adjudicate them. It is unclear whether that is because they have been hard to prove or because of the potential high price of declaring the truce a failure.”

Despite the obvious problems with the hotline, State Department spokesman John Kirby stated in a press conference on Tuesday that, “over the last 24 hours we’ve not been apprised of any claims of any additional violations of any significance.”

Kirby was vague when pressed to define what constituted a significant violation.

State Department spokesman Mark Toner said in his daily briefing on Wednesday, “We are aware that there were some language issues and we’re working to correct those, obviously, because it’s important that we have Arabic speakers that are able to field incoming calls.”

He added that the Arabic language skills of some of the operators “weren’t properly vetted.”