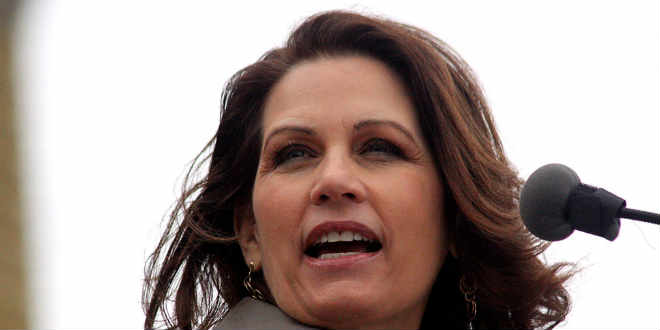 In an recent interview, Michele Bachmann, a four-term former member of the House of Representatives, reaffirmed her belief that the End of Days is near and revealed how current Middle East events mirror Biblical prophecy.

Bachmann has stated many times that the world is moving towards Armageddon, with grave implications for the future of Israel.  Her opponents criticize her for framing political issues in Biblical terms, but her Biblical perspective allows her to view imminent catastrophe in a positive light, accepting it as part of God’s plan.

A devout Evangelical Christian, Bachmann views world events through a Messianic lens, a perspective she describes as “a Bible in one hand and a newspaper in the other”. Like many rabbis, she sees Russia’s involvement in Syria as the precursor to the prophesied War of Gog and Magog. In a radio interview on the Olive Tree Ministries website earlier this month, she spoke passionately about the situation in Syria in the context of Biblical prophecies about the end of days.

Bachmann interpreted Russian intervention in Syria as the precursor to Putin’s more complex regional aspirations, explaining, “They would partition it so that Eastern Syria will effectively be considered disputed occupied territory by the Islamic State (ISIS). The world is about to grant legitimacy to the Islamic State, which will have control over Eastern Syria and Iraq.”

Noting the recent discovery of massive natural gas reserves in the Mediterranean and shale oil in the Golan, she speculated that Putin intends to control Western Syria. “If [Russia] can control that Eastern shore of the Mediterranean Sea, so that they can have that port, that’s what they’re really interested in: the potential offshore energy.”

She also predicted that Putin would invade Israel in partnership with Iran and supported by China. This move will give Russia a power base in the Middle East to control the world supply of oil and natural gas, thereby creating what Bachmann calls “a global world order”.

This, Bachmann said, is a fulfillment of Ezekiel when he describes the apocalyptic battles of Gog and Magog in chapters 38 and 39. She identifies Russia as Magog, described in Ezekiel as being “Rosh” from “the far north”. As a Christian, Bachmann bases her beliefs on the Bible, saying her theory about Syria “lines up with scripture.”

Her platform on social issues is firmly rooted in the Bible and the belief that “Biblical basis for society is the key to happiness.”

Bachmann mentioned Isaiah 12:3, a key Biblical verse which is the basis of much support for Israel. “Any nation that accepts God and his principles is blessed, and those who push away are cursed. That’s what we’re seeing happen to the United States,” she said in the interview. “We will suffer the consequences as a result.”

Her strongest criticisms were saved for the Obama-brokered deal with Iran over its nuclear program. She saw the unanimous UN Security council vote in support of the deal as fulfilling the Zechariah 12:3, which prophesied that the nations of the world will unite against Israel. She cited the UN vote as fulfilling that prophecy, being the first time the entire world has gone against Israel.

Bachmann argued that Obama’s agenda threatens the world and will bring about the prophesied end of days. Obama’s plan, according to Bachmann, is to become Secretary General of the UN, expanding its power in order to actively bring the US under its authority. For Bachmann, this is “foretold”, as she cites Acts I and Acts II from the New Testament.

“If we were smart enough with our Bible, we would know that,” she said with absolute certainty. “This is about the Lord speaking to the world, saying, ‘I am coming soon’”.

Obama responded by mocking her. At the White House Correspondents Dinner last March, the President scoffed at Bachmann’s prediction he would “bring about the Biblical End of Days.”

“Now that’s a legacy,” he quipped. “That’s big. I mean Lincoln, Washington, they didn’t do that.”

Despite viewing current events in an apocalyptic framework, she remains optimistic. According to Bachmann, grim world events herald in the messianic era. In an interview on One Place last April, she expressed this in no uncertain terms.

“We see the destruction, but this was a destruction that was foretold,” she said. “The prophets in the Old Testament, they longed to look into the days that we live in, they longed to be a part of these days. That’s why these are not fearful times. These are the most exciting days in history.”