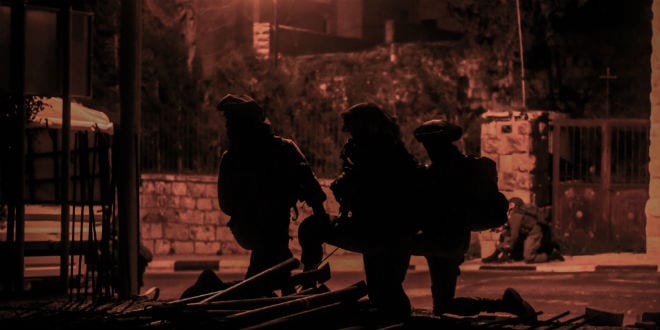 An IDF rescue mission descended into a violent gunfight on Monday night after the Israel Defense Forces sent troops into the Palestinian Qalandiya refugee camp to retrieve two soldiers who had accidentally entered the area.

The two soldiers were safely extracted from the camp, located north of Jerusalem, but ten IDF troops were injured during the ensuing riot. One Palestinian man was killed and six more wounded, according to the Palestinian Red Crescent.

Two non-combat soldiers of the Oketz K-9 unit had apparently driven into Qalandiya by mistake on Monday night around 11 pm. Their army vehicle was immediately attacked and set on fire by Palestinians throwing Molotov cocktails and stones.

The soldiers were forced to flee from the vehicle. They separated and ran for cover. One of them had taken his cell phone and was able to make contact with the IDF almost immediately. He hid in the yard of a house in the camp and was rescued within 20 to 30 minutes, said an army spokesperson.

The second soldier escaped from the refugee camp without his phone and found his way to nearby Kochav Ya’akov, a Jewish community about ten minutes from Jerusalem, where he was able to make contact with the IDF about an hour after the soldiers first entered the camp.

Both soldiers were armed. IDF spokesperson Moti Almoz told Army Radio on Tuesday morning that one of them had used his weapon “to both protect himself and to signal [his position] to the forces.”

During the harrowing rescue operation, Israeli forces exchanged heavy gunfire with armed Palestinians rioting through the camp. One Palestinian was reported killed by a shot to the head.

Ten Israeli troops, including five IDF soldiers and five paramilitary border policemen, were injured during the rescue mission and gun battle, one moderately and the rest lightly. They were taken to Hadassah Hospital in Jerusalem for treatment.

Qalandiya, located on the outskirts of Ramallah, has been the scene of several violent clashes before. It is a dangerous area known for lawlessness, and one which Israelis generally avoid at all costs.

Despite that, the IDF has a long-standing policy never to leave Israeli soldiers – or civilians – behind, not hesitating to carry out the most complex and dangerous missions in incredibly high-stakes situations. The Jewish principle of cherishing life stems from the Talmud, a collection of Biblical commentaries, which states, “Whoever destroys a soul, it is considered as if he destroyed an entire world. And whoever saves a life, it is considered as if he saved an entire world.”