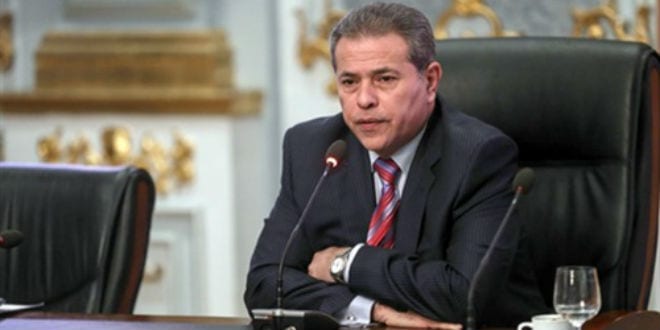 In a moment of absurdity at the Egyptian parliament on Sunday, an enraged Egyptian MP hit fellow lawmaker Tawfik Okasha with a shoe after Okasha hosted the Israeli ambassador for dinner. Other MPs called for Okasha’s suspension from Parliament for the offense.

Okasha had issued a public dinner invitation to Israel’s ambassador to Egypt, Haim Koren, on a live television broadcast in a deliberate move which angered many Egyptians. “I have personally invited the Israeli ambassador to Cairo, Haim Koren, to a dinner at my house next week to discuss the Nile dispute and other important issues,” he announced on his talk show, Egypt Today.

Koren accepted, and Reuters reported that the ambassador visited Okasha’s home last Tuesday. The two statesmen discussed issues of trade, politics and agricultural cooperation over a meal. The Israeli embassy posted about the meeting on its Facebook page, saying, “The meeting lasted more than three hours and included a dinner. It was a very good meeting and the two parties agreed to continue collaborating in the future.”

The visit came several weeks after Egypt sent an ambassador to Israel for the first time in three years, renewing a diplomatic relationship which suffered after Operation Pillar of Defense.

However, the meeting between Koren and Okasha ruffled feathers among Egyptians, most of whom, despite the peace treaty which Israel and Egypt signed in 1979, do not harbor much love for the Jewish state or people. Free Beacon reported the results of a poll which suggested that 90 percent of Egyptians objected to the meeting.

Egyptian lawmakers were also outraged, with a hundred members of the Egyptian legislature calling for an emergency session of Parliament specifically to discuss the meeting and stating categorically that they reject the “normalization” of ties with Israel.

At the session, which took place on Sunday, several lawmakers demanded Okasha’s dismissal or suspension from parliament in light of his transgression.

The argument came to a violent peak when MP Kamal Ahmed removed his shoe and smacked Okasha with it, a well-known insult in Arab culture. In the tumult following the incident, the speaker of parliament threw both members out of the session.

According to Ynet, Ahmed said that Okasha “deserves 90 million shoes” for inviting the Israeli ambassador to his house. “I want to shoot him. What I did reflects the nation’s opinion. I did what I did because I am an MP and a representative of the people. Every time I see him, I’ll hit him with a shoe,” he vowed.

Okasha, who is known for being controversial, remained defiant, telling media before the Sunday session that he had done nothing wrong, as Egypt and Israel have a full diplomatic relationship. “I acknowledge the State of Israel, and all the agreements between the countries are in line with my views,” he said after the session, TPS reported.

For his part, Koren remained positive, telling Reuters, “I will soon be inviting him over to our place. He showed great courage. He knew he would be attacked, and nonetheless he stood firm on his convictions.”

While Okasha is arraying himself with those who bless Israel, his compatriots are in danger of forgetting the prophecy of Isaiah, who foretold the destruction of Egypt and Judah’s triumph over it.