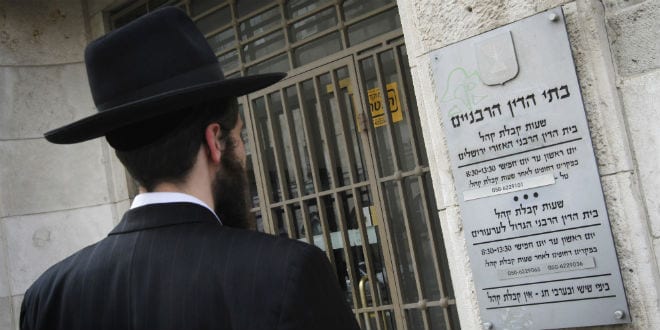 Last week, the Rabbinic High Court of Appeals issued a herem, or order of excommunication, against Dr. Oded Guez.  Excommunication is rarely invoked in the Jewish community and most people are more familiar with its use in the Church.  In this case, the rabbinic writ of excommunication has been termed ‘shaming’ by the media, and in truth, that is precisely what it is.

The herem was issued because Guez refuses to grant his wife a get, or writ of divorce. According to Jewish law, a get must be given by a husband to his wife to legally sever the bonds of marriage. If he refuses, the consequences for his wife are dire: she becomes essentially “chained” to him, unable to remarry or have children with another man. In cases of refusal, a beit din, or court of rabbis, attempt to exert pressure on the husband through different means at their disposal, one of the most extreme of which is herem. Under some cases, the court can also put the husband in prison, but some argue that herem is actually the worse punishment.

For last four years, Guez has refused to give his wife a get. The Rabbinic High Court made the decision last week to essentially excommunicate him from the Jewish community, ordering that Guez’s personal details and photo be made public so that the community will know not to honor or host him, allow him to attend synagogue, or visit him at his home if he is ill.

In the book of Ezra (10:7-8), herem refers to the confiscation of property by the court and exclusion from the community. The collection of Jewish Bible commentary, the Talmud, expands on the concept, listing 24 offenses that are punishable by excommunication and forbidding coming within six feet of someone in herem.

In an interview with YNet, Rabbi Shimon Yaakovi, chairman of the Rabbinic High Court, echoed the Talmud, specifying that herem means that the public will distance themselves from the accused.

The rabbi was asked if public shaming was too extreme a measure, with cases of victims of shaming committing suicide in the past. The rabbi agreed that it was an extreme measure, but that the Rabbinic Court felt this was the proper step to be taken.

“We recognize that he will probably have to move to a different community, and there may be communities that are willing to accept him in spite of the rabbinic ruling. But in any case, he was amply warned and this man has to take responsibility for his actions,” Yaakovi said.

According to Jewish law, once a rabbinic court invokes herem, Jews are forbidden from associating with the offender. Shortly after the court instituted the herem, Guez was fired from his post at Bar Ilan University, which posted on its official Facebook page, “We have no connection with him”.

The rabbinic invocation of herem against Guez was taken up on social media, even by secular Israelis concerned about his wife’s rights, who  called for the academic community to refuse to employ Guez and to follow the rabbinic ruling. Hundreds of people shared Facebook posts featuring the order of herem and Guez’s photo and name.

Social media has become an integral part of the modern incarnation of this ancient punishment, and Rabbi Yuval Cherlow of the Tzohar organization has issued guidelines of how to use social media for instituting herem in these cases.

Shaming, or herem, was traditionally used by Jewish courts as a punishment for heretical beliefs. Famous Jewish thinker Baruch Spinoza and respected Biblical commentator Maimonides were both put in herem for heresy. More recently, in 1945, Mordechai Kaplan was put into herem by the Union of Orthodox Rabbis for founding the reconstructionist movement.

Though herem is still used by rabbinic courts, the ancient status has taken on an entirely modern incarnation with enormous impact and has even begun to appear in American courts. Recently, judges have used their legal latitude in choosing punishments to include shaming as part of sentencing. Scarlet letters for adultery, being locked in public stocks, and public registry for sex offenders are the precedents upon which they base their decisions.

Christianity invokes heresy in a manner similar to Judaism. In Christianity, as in Judaism, it is rarely used in modern times. Rather, it is a final resort that involves banishment, shunning, and shaming.

Based on a verses in the Christian Bible, Christianity invokes excommunication for heresy in a similar manner to Judaism. A verse in Corinthians teaches to excommunicate in cases of sexual immorality. A verse in Paul includes greed, idolatry, and swindling as offenses worthy of excommunication.

Unlike herem, excommunication from the Church is not a punishment. Rather, it is intended to be restorative and healing, with some Christian sects praying for the excommunicated person. Also unlike Judaism, most sects will not sever the offender from his or her livelihood.

Judaism prohibits an excommunicant from attending synagogue. However, Catholicism permits the offender to attend mass and urges him to maintain a relationship with the Church. However, it forbids the offender from certain religious benefits such as receiving the eucharist or sacraments or from being involved in anything ministerial.

During the Middle Ages, formal acts of public excommunication were sometimes accompanied by a ceremony wherein a bell was tolled (as for the dead), the Book of the Gospels was closed, and a candle snuffed out . This is markedly similar to the Jewish practice of herem in the same period, in which a shofar was blown in front of an open ark of Torah scrolls and the community would lament while holding black candles for mourning. Christianity and Judaism have both abandoned the ceremonies and excommunication is today instituted by written declaration and a public announcement, by a Bishop in Catholicism and by a bet din in Judaism.