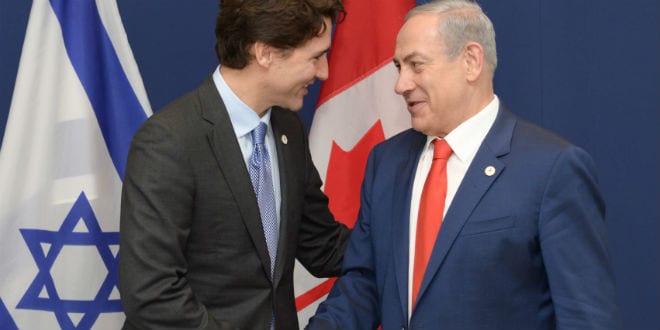 As anti-Israel activists worldwide gear up to celebrate the 12th international “Israeli Apartheid Week”, yet another country put on a strong display of solidarity with Israel when the Canadian Parliament passed a motion on Monday condemning the Boycott, Divestment, Sanctions (BDS) movement by a vote of 229 to 51.

According to CIJ News, the motion read as follows:

“That given Canada and Israel share a long history of friendship as well as economic and diplomatic relations, the House reject the Boycott, Divestment and Sanctions (BDS) movement, which promotes the demonization and delegitimization of the State of Israel, and call upon the government to condemn any and all attempts by Canadian organizations, groups or individuals to promote the BDS movement, both here at home and abroad.”

Last week, Shimon Fogel, CEO of the Canadian Centre for Israel and Jewish Affairs, told the European Jewish Press, “The boycott movement does not contribute to peace and is not pro-Palestinian. It is discrimination based on nationality, and it harms both Israelis and Palestinians alike by driving the two sides further apart.”

Following the motion’s landslide pass from both the Conservative and Liberal parties, Foreign Affairs Minister Stéphane Dion said, “The world will win nothing for boycotting Israel but depriving itself of the talents of its inventiveness,” CIJ News reported.

Canada is the latest of several countries to express its condemnation of the anti-Israel movement. Just last week, the House of Lords in the UK ruled that boycotting Israel in any form would be considered illegal and that “Any public bodies that continue to pursue boycotts would face severe penalties,” The Independent reported.

Despite the significant increase in international condemnation of the boycott movement, “Israeli Apartheid Week”, an initiative led and supported by the BDS movement, has not lost its momentum. Numerous locations throughout Europe, North America, South Africa, and Latin America will play host to the event over the next seven weeks.

According to their website, “Israeli Apartheid Week”, which usually occurs on college campuses worldwide over the course of two months, “aims to raise awareness about Israel’s ongoing settler-colonial project and apartheid policies over the Palestinian people.”

Those involved in raising awareness demonstrate their perception of Israel’s inhumane treatment of its Palestinian neighbors. Rallies are held, lecturers are invited to speak, t-shirts with sayings such as “End Israeli Apartheid” are sold, posters are waved, and episodes of supposed Israeli brutality are reenacted.

Renowned Biblical scholar Rashi, who died in the early 12th century, predicted that a day would come when the nations of the world would deny the Jewish people’s right to the Land of Israel. That prediction is coming to life, as the ultimate goal of the BDS movement is not only to vilify the country in the world’s eyes, but create doubt around the Jewish claim to the land. Indeed, the rhetoric spread by BDS is that Israel drove Palestinians out of the region in 1948, took away their homes, and boasts an occupation of land that does not belong to them.

For a bystander who remains unaware of the truth behind the BDS-run display, the exhibit is compelling, encouraging anyone who cares for humanitarian rights to join against Israel. In reality, “Israeli Apartheid Week” is little more than a hate-filled stunt pulled by people with anti-Israel sentiment determined to convince others of the same.