Syrian Refugee: “Jews are Most Humane and Generous People of This Era”

Home » Syrian Refugee: “Jews are Most Humane and Generous People of This Era” 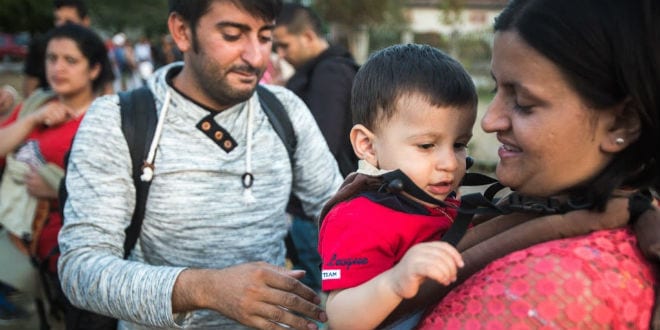 While most of Israel’s Arab neighbors routinely vilify the Jewish State, one Syrian refugee has set out to express his gratitude to the one nation he least expected to offer a helping hand. 39-year-old Aboud Dandachi has set up a website to share stories of Israelis and Jews fulfilling the Jewish precept of loving the stranger by reaching out to Syrian refugees like himself.

Dandachi has now relocated to Istanbul, Turkey. According to the Jerusalem Post, Dandachi, a Sunni Muslim, was initially neutral when the nearly-five-year-old civil conflict broke out in his home country.

In March of 2011, “I didn’t support anyone because my life was good,” the high-tech professional told the paper. “I did not need the government and I only wanted them to leave me alone.” That began to change when the government massacred 100 protesters overnight.

He predicted the war would be resolved quickly, but days turned to months, and even years, and in September of 2013, when Syrian President Bashar Assad was using chemical weapons against his own people and the Islamic State (ISIS) had overrun Raqqa, Dandachi decided it was time to leave. He tried Lebanon, but soon realized he had simply swapped one conflict zone for another, and continued to Turkey, where he now resides.

The one lesson he says he learned for the entire ordeal is that far from being the Great Satan, as he had been taught all his life, Israel is one of the few states doing the right thing.

“Israel is doing exactly what it must do,” he explained. “It is not taking part in the war, but is helping wounded Syrians who need help. And it’s not only the government. Israelis are helping Syrian refugees in Jordan, in Greece, Serbia, North America. No one would have blamed the Jews and the Israelis if they had said it was not their problem. That is, by the way, what many Arabs and Arab countries did. The Gulf states, for example, shut their doors to Syrians – and these are the countries that call themselves friends of Syria.”

Dandachi continued, “I grew up with statements like ‘these people are your enemies. The Jews are evil’. And then I saw that the Jews are the most humane and generous people of this era. When I see that Hezbollah and the Iranians are coming to kill me and I’m forced from my home by Syrians, and then I hear that Israelis and Jews are helping Syrians, my view of the world changes.”

Dandachi hopes he is not alone in having learned this lesson. “Someday, when this war is over, and there is no doubt that it will be over sometime, I do not want the Syrians to be involved in unnecessary conflicts. There no reason for us to be in a conflict with Israelis. What kind of disagreements are there between the two sides? The Golan Heights, for example, is an issue that is very easy to solve, certainly compared to other complicated issues in our region.

“Why are we the Jews’ enemies?” he asks. “At a time when Donald Trump is defaming us, when Denmark and Switzerland confiscate Syrian refugees’ belongings, when all these countries are against us – we have the Jews who even endanger themselves to help us. So why should I be an enemy of the Jews? They have proven that they want to be my friends. They held out their hand, so why should I turn against them?”

To help spread the word, Dandachi launched his website in December, called Thank You Am Israel. Through the site and parallel Facebook page, he recounts stories of Jewish and Israeli generosity towards Syrians in need.

“There are so many stories that I want to put up,” he says. “There are new stories of Israelis helping Syrians every day. As far as I’m concerned, because we as Syrians cannot give back to Jews what they give to us, so we should at least thank them.

“I remember talking about it for the first time in 2014, when Israeli Prime Minister Benjamin Netanyahu visited wounded Syrians at the Golan Heights and he was photographed. I remember that the Syrian opposition then said that Netanyahu should stop using wounded Syrians for propaganda and other nonsense. I told the opposition at the time: ‘Are you crazy? You can’t even say thank you?’ It is so immature.”

He acknowledges, however, that he is a lone voice in a vast ocean of hatred. “Unfortunately, the reality in the Middle East is that there is no Arab politician who will say ‘thank you’ to Israel. That is the reality of the Middle East, because then they would lose support and popularity.”

But for the Israelis and Jews worldwide who are reaching out, it is obvious. Rabbi Dan Moskovitz’s Canadian congregation raised money to sponsor at least two refugee families. He told Tablet Magazine, “Look, 36 times in the Torah we are commanded to love the stranger, because we were once strangers in the land. You don’t repeat something 36 times in the Torah unless it’s really important. … We are supposed to see the world through the lens of our own experience, to see the suffering of others as though it were ours.” That is precisely the sentiment driving his congregation and other Israelis and Jews around the world.