The Musical Revolution That is Bringing Messiah

Home » The Musical Revolution That is Bringing Messiah 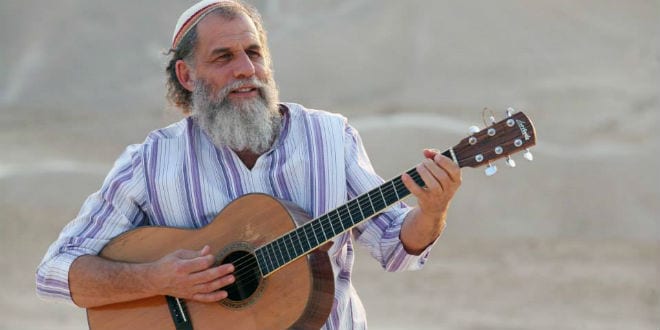 In the world of Jewish music, Yehudah Katz has been the holy minstrel, blessed to play amazing music for many years, connecting worlds and bringing Jews together. It is a gift he received from his teacher, Rabbi Shlomo Carlebach, and he has carried that flame faithfully to guide Jews towards the Messiah.

Katz opened up a new age in Jewish music when he formed a group called Reva L’Sheva (Quarter to Seven) in 1994, combining classic American rock with Jewish spirituality, a blend that resulted in beautiful music that touches the soul. Jewish music changed from being an accompaniment to an event like a wedding or bar mitzvah, a distraction to accompany a rabbi or a ritual, to being an event unto itself, with song and dance becoming a new form of prayer. It was almost like Woodstock met the Temple Mount and, in the spirit of the sixties, the Israeli music scene became the vehicle for a spiritual journey.

Jewish music is a part of a Messianic process, Katz explained by quoting the Gaon of Vilna. “There’s only one thing that can bring geula (redemption) to the world and that thing is achdut yisrael (unity of Israel), and the only thing that can make achdut yisrael is singing together, shira v’zimra (music and singing).”

Katz continued, “When talking about the Jewish people we can disagree forever, but that’s not important. What is important is that we are brothers. And how should you treat your brother? I see it at Shabbos (Sabbath) tables. People argue for hours and then they stop talking and start singing together.”

With Zen-like humility, he sees his role as a musician as bringing people together, but not as a rock star or the focus of the event, saying simply, “People are coming together because they want to be together.”

Yehuda has a powerful vision of Am Yisrael (the nation of Israel) and the journey we are all on. He explained this vision to Breaking Israel News by telling  a story.  Katz was driving with some friends to his home in Tekoa, Israel, to record music together. He told them about a dream he had the previous night.

“You won’t believe this dream I had last night. We were doing a concert in Paris and there were hundreds of thousands of Jews there, and after the event, they were all singing together, and then they all came to Eretz Yisrael (the Land of Israel).”

One of the other musicians replied, “Wow, I wish I was standing there.”

He learned how to achieve this powerfully uplifting mix of Torah and music from his close friend and rebbe (spiritual guide) of over 20 years, Rabbi Shlomo Carlebach.

“Obviously, I had the greatest teacher in the world, who understood the koach (power) of music. Because of his great love for the Jewish people and all of mankind, Shlomo just wanted to see people get together,” he said.

“Watching him do his magic, taught me how powerful music can be, if you just let it be. There is an inherent power in a melody that has nothing to do with words. If you allow it to take take over, it will bring you to places you never even knew about, but those places are always there.”

He explained it as  only a musician could. “The melody opens gates, and when those gates are open, all the walls are broken down. You’re no longer paying attention to who is sitting next to you. That’s melody and it brings people closer.”

For Katz, it is the differences  in the music that bring people together. “Harmony is created by hearing what the other musician is playing. If you are playing a melody, I don’t have to play the same melody, but I can still harmonize with you. I don’t have to agree, but I still found a way to connect to you.”

This is an intensely Jewish experience for Katz, flowing from Jewish concepts rooted in the Temple. Katz related that Rabbi Shlomo used to say before he performed, “The fire on the altar shall be kept burning. It shall not go out.” (Leviticus 6:12) Rabbi Shlomo would always add with a sigh, “Just one more time.” Katz took his rebbe’s example, adding his own prayer before every concert: “God, please give me the koach (strength) to bring simcha (joy) to this room.”

Katz has always tried to connect his music to the Jewish Temple.

“Where does Jewish music come from? It comes from the Temple. There was no prayer without music. The Levites weren’t entertaining people. The Levites were opening up their hearts with music.” In a message relevant for our time, he continued, “It’s all about peace. Peace means you want the Temple back. Everyone wants peace here, every single Jew. Can you say that about other people? We’re talking about the holy land!”

Yehudah Katz’s music is available on the Israel365 store. Click here for details.