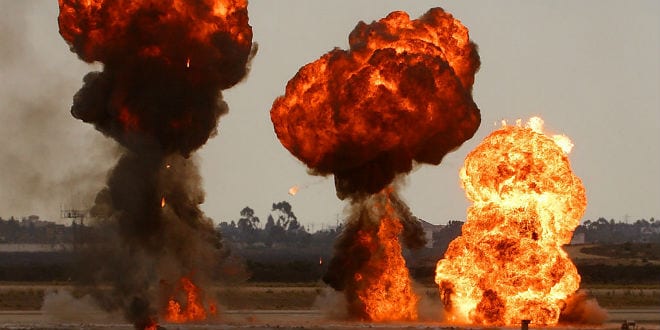 Hezbollah could defeat Israel in a conflict by bombing an Israeli chemical facility in Haifa, killing thousands, said leader of the Lebanon-based terror group Hassan Nasrallah.

Though Hezbollah is not actively seeking war with Israel, he said, if necessary, the group could easily devastate the country by using its arsenal of rockets to blow up ammonia tanks at a chemical facility on Israel’s coast. According to Nasrallah, the number of casualties would be comparable to the number caused by a nuclear attack.

Nasrallah apparently got the idea from an Israeli official who had made a statement saying that a strike on the facility would cause “tens of thousands” of fatalities, the Times of Israel reported. The terrorist mastermind quoted the official in his threat, adding that Israel “feared” such an attack.

Nasrallah’s message had an immediate effect. Mere hours after the threats were made, Environmental Protection Minister Avi Gabbai announced he had ordered that the ammonia storage facility be moved to the Negev desert in southern Israel.

Top IDF general Lt. Gen. Gadi Eisenkot said that Israel has “effective deterrence” against Hezbollah. Though the terror organization had been a dangerous enemy in the past, Eisenkot pointed out that Israel’s northern border with Lebanon has been its quietest frontier for the past ten years.

Haifa mayor Yona Yahav used the brief moment in the spotlight to speak about environmental problems in Haifa, saying that the city was happy to accept the national attention “even if it arrives from a frightened man hiding in his bunker.”

While Haifa is a modern Israeli city, its location is referred to in the Bible. During the Israelite period, King Solomon gave a northern swath of land, stretching from the western shore of the Sea of Galilee to the coast of the Mediterranean, an area that included modern Haifa, to Hiram (1 Kings 9:11). Nearby Mt. Carmel is the site of many of the acts of Elijah the Prophet in the 9th century BCE.