Germany Vows: We Will Not Normalize Relations With Iran Unless it Recognizes Israel

Home » Germany Vows: We Will Not Normalize Relations With Iran Unless it Recognizes Israel 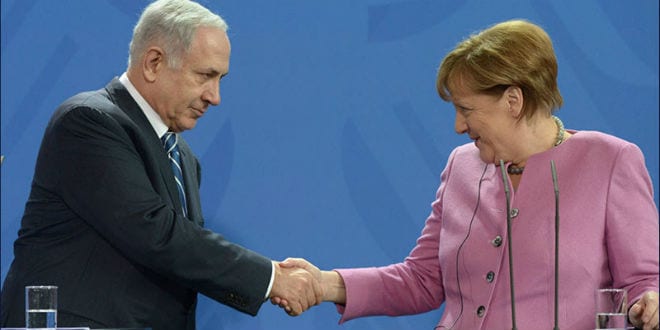 As Israel and Germany strengthen their diplomatic and economic ties during a state visit, a statement by German Chancellor Angela Merkel came on Tuesday vowing that Germany will not “normalize” relations with Iran until it agrees to recognize Israel.

Merkel made the statement during a joint press conference with Israeli Prime Minister Benjamin Netanyahu, who is in Berlin for an official government-to-government meeting. “We made very clear — the federal government, all parties that make up the coalition — that there cannot exist normal, friendly relations with Iran as long as Iran doesn’t recognize Israel’s right to exist,” Merkel said, the Times of Israel reported.

“In all conversations [with Iran], my ministers, and I myself if applicable, have made this clear,” she said firmly.

Merkel also spoke about the ongoing conflict over the creation of a Palestinian state, saying that given Israel’s security situation, a two-state solution was not currently viable. Now is “certainly not the time to make really comprehensive progress”, she said, but “you can achieve improvements in certain places.”

While Germany, along with the European Union (EU), believe that “peaceful coexistance” is ultimately predicated on a two-state solution, they are “very concerned about seeing things realistically,” Merkel said, adding, “We know the threat of terrorism that Israel has to endure.”

Netanyahu supported her statement, saying that most world leaders had also come around to this way of thinking, and condemned the recent French initiative to force a solution by convening a multi-nation “peace conference”.

He hailed the strong relationship between Israel and Germany, which the two countries had established over the course of 50 years. “In that half century, we have built a unique relationship and partnership that has significance far beyond the confines of this hall because it doesn’t only bring tangible benefits to both our countries, but it also gives hope to all mankind,” said Netanyahu.

Germany and Israel enjoy what may seem the unlikeliest of friendships. Following the Holocaust, Germany repented for its horrific genocide against the Jewish nation, both in national consciousness and with reparations to Holocaust survivors. In contrast to the deep devastation that the country suffered following its defeat in World War I, Germany’s sincere teshuva, or repentance, enabled it to flourish after losing World War II by meriting to become a nation from which God’s judgement has lifted, as is written in Jeremiah 18:8: “If that nation I warned repents of its evil, then I will relent and not inflict on it the disaster I had planned.”

The two leaders also expressed their strong commitment to human rights and to the fight against anti-Semitism and racism, including religiously motivated attacks, said a statement by Israel’s Ministry of Foreign Affairs.

Not only do Germany and Israel share values, Netanyahu said, but technological innovations as well. Netanyahu pointed to several sectors in which Israel and Germany enjoy a mutually beneficial partnership, including cyber security, counterterrorism efforts, energy and water, and technology.

“In these and many other areas, our cooperation enables both Germans and Israelis to better meet the challenges and the threats as well as to seize the technological and scientific promise of the future,” said Netanyahu.

“By cooperating, we make each other stronger and we are better able to innovate, and the future belongs to those who innovate,” the prime minister continued.

On the same day, Germany and Israel demonstrated their fruitful relationship in the field of medical research. Merck, a German chemical, pharmaceutical and life science company, extended its partnership on Tuesday with Israel’s  Weizmann Institute of Science, located in Rehovot, establishing a framework for research collaboration and licensing.

Merck will fund several areas of specialized research at the Weizmann Institute with up to $1.2 million per year for each research area over a three-year period.

“We are proud that such a fruitful relationship like the one we have with Merck is now extended and that we have the chance to take part in creating new innovative solutions in such critical fields that so many patients globally are suffering from,” said the Weizmann Institute’s Professor Mudi Sheves, echoing Netanyahu’s words to Merkel.