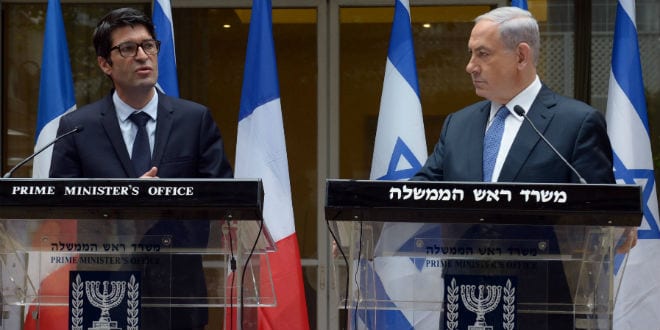 France formally presented Israel with its foreign plan to restart talks for a two-state solution on Tuesday. The plan calls for an international peace conference, hosted in Paris this summer, at which multiple nations would facilitate talks between Israel and the Palestinian Authority – talks which Israel has firmly said it would only undertake face-to-face with the PA.

In a statement following the meeting, Foreign Ministry spokesperson Emmanuel Nahshon said, “Israel supports direct negotiations with the Palestinians but opposes any attempt to predetermine the outcome of negotiations.”

The PA has enthusiastically taken up France’s idea, first proposed several weeks ago, to form an international framework similar to that which negotiated the recent Iranian nuclear deal. France’s then-Foreign Minister Laurent Fabius announced the plan, which he described as “an international conference bringing together the parties and their main partners, American, European, Arab, notably to preserve and make happen the solution of two states.”

However, Fabius added a thinly veiled threat aimed directly at Israel, saying that if a solution could not be reached, France would “take responsibility and recognize the Palestinian state.”

Furious at France’s ultimatum, Israel quickly responded, rejecting the proposal out of hand as essentially incentivizing the PA to refuse a peace agreement.

“This is not how one conducts negotiations and not how one makes peace,” said one Israeli official.

The PA’s chief negotiator, Saeb Erekat, immediately praised the plan, saying, “We welcome the call made by France for serious international involvement towards ending the Israeli occupation that began in 1967.”

Israel maintains that direct talks between Israel and the PA remain the best chance for peace. Prime Minister Benjamin Netanyahu pointed out that direct talks had successfully led to the signing of peace agreements with Jordan and Egypt, and that the concept had international support.

On Monday night, an official in Netanyahu’s office said that Palestinians know well that direct negotiations are the only way to solve the crisis, and are refusing to participate for that reason.

The PA, eager to bring the issue to an international forum, where its cause usually shines, announced on Monday that Palestinians will “never go back and sit again in a direct Israeli-Palestinian negotiations,” the Times of Israel reported. PA Foreign Minister Riyad al-Malki made the remarks during a visit to Japan with PA Chairman Mahmoud Abbas.

The Palestinian foreign minister also sinisterly warned that without a multilateral framework involving international partners, ISIS might “take advantage” of a potential “vacuum” in the region.

“If the Americans are giving up and the Europeans don’t have the courage to do anything and Arabs are really worried about their own problems, what do you expect? Extremists around might take over,” said Malki.

The two-state solution is predicated on giving up parts of Judea and Samaria, two of the most biblically important areas in Israel. Samaria is the name of the area which contained the Kingdom of Israel, and Judea represents the ancient Kingdom of Judah. A large portion of Biblical events took place in these ancient mountains, and many Israelis do not support turning them over to Palestinian control.