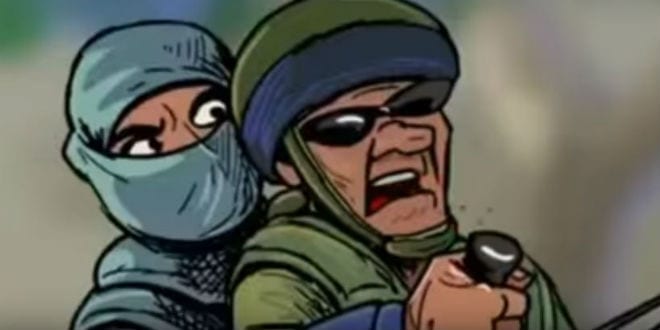 Palestinian incitement reared its ugly head again this week with a violent new animated video calling for the murder of Israelis making the rounds on social media. Whether stabbings, shootings, or car rammings, every method of murder is praised in this short but hate-filled cartoon, which is aimed at young viewers. Most of the attackers in the current wave of terror have been under the age of 25, and some have been as young as 12.

The 50-second clip opens with a Palestinian man watching videos on his laptop when he sees images of the dead body of a female terrorist. The image likely refers to a recent incident in which a Palestinian woman was shot after she attempted to stab IDF soldiers in Hebron.

With his anger properly incited, the man grabs up a knife and goes out to the street with intent to carry out terror attacks against Israelis, civilians and soldiers alike. As he walks, images of dead Palestinian “martyrs” flash on the walls, presumably to bolster his confidence and encourage him to continue what they started.

The video then becomes quite graphic, depicting the stabbing of IDF soldiers and car rammings, similar to the one carried out in Jerusalem in December which left nearly a dozen people injured. The video serves as a sort of how-to: terrorists are shown stabbing soldiers and civilians in the neck and other sensitive areas on the body.

At the very end of the cartoon, the terrorist is seen entering paradise, reaping his heavenly reward for his horrific actions.

This video is only the latest in the onslaught of anti-Israel propaganda disseminated by Palestinian terrorists whose goal is to kill Israeli Jews. Only last week, a pro-Hamas music group released their own music video with calls to “Blow the roof off the bus,” referring to reinstating the method of suicide bombers who blow up Israeli buses, a type of attack common during the Second Intifada.

In the times when the Temple stood in Jerusalem, song and music were used to glorify God’s Name, raising the spiritual morale of all those who merited to hear it. Sadly, by stark contrast, today music is used to push a terrorist agenda, glorifying death and murder against God’s people.