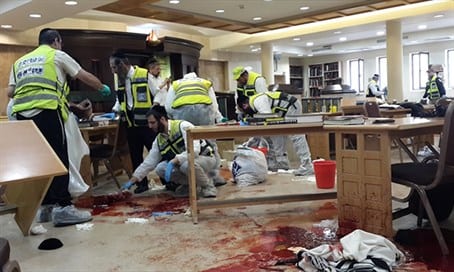 Against the background of almost daily terror attacks and emergency situations in Israel, ZAKA Search and Rescue has recently launched an online donor matching campaign to raise a total of $550,000 to purchase, equip and maintain five urgently needed ZAKA ambulances for the Jerusalem, Gush Etzion, Haifa, Ashkelon and Rehovot areas.

ZAKA’s Jerusalem ambulance has been in action for over 12 years. In ambulance years, when advanced medical technologies can mean life or death, this is ancient. Therefore, ZAKA desperately needs a replacement for the capital. In the other four cities, there are currently no ZAKA ambulances at all to service the local populations.

Established in 1989 to respond to terror attacks and deal with the retrieval, identification and burial of the deceased, an important Jewish value, today ZAKA is a UN-recognized organization known for the outstanding search and rescue support it provides not only in Israel but worldwide.

At times of heightened terror and tragedy in Israel, ZAKA ambulances are in use around the clock. These unique vehicles are unlike the standard ambulances used throughout the world. A ZAKA ambulance is a specialized mobile store-room which provides ZAKA volunteers access to all types of emergency equipment to perform their mission of saving lives when possible and honoring the dead (In Hebrew, chesed shel emet) when needed.

ZAKA is recognized as the preeminent organization for honoring the dead, a Biblical commandment. After any disaster, ZAKA volunteers are seen collecting body parts and cleaning up blood. Though a gruesome task, their staff lives with the Jewish knowledge that despite a body’s demise, the essential person is his soul, which lasts eternally and is deserving of honor. ZAKA volunteers are responsible for transporting terror and accident victims to their final resting places.

According to the Bible, the most important acts a person can perform are saving a life and taking care of the dead. These two concepts take precedence over all other commandments, including observing the Sabbath. The Talmud, Jewish oral law, discusses the great importance of burying the dead. What ZAKA volunteers are best known for – gathering the remains of the dead – is considered the purest act of kindness a person can do, as the deceased can never return the good deed.

ZAKA ambulances are equipped with emergency first aid, supplies to help volunteers fulfill the commandment of honoring the dead, oxygen tanks, emergency lighting, generators, rescue equipment and more. The ambulances are on standby 24/7, ready to assist in any emergency situation.

“Thanks to the generosity of a ZAKA donor, who has pledged to match funds raised for the ambulances, we are looking to raise $275,000 within the next four weeks,” Yehuda Meshi-Zahav, ZAKA Chairman, said in a statement. “The anonymous donor will match this amount to meet the full cost of five ambulances – $550,000. We invite our friends and supporters from around the world to partner with ZAKA in their sacred mission and donate to this urgent appeal.”

Unlike other Israeli ambulance organizations, ZAKA does not charge for their services. Nor are only terror victims and mass casualty events handled by ZAKA ambulances. Pregnant women are also often transported in ZAKA ambulances because they know that they will not be billed for the assistance.

“Israel is on the cutting age for search and rescue because, unfortunately, we are constantly challenged by first-hand tragic experiences,” noted Yossi Fraenkel, ZAKA International Rescue Unit Operations Officer and Deputy Commander of ZAKA Jerusalem, to Breaking Israel News. “Israel is suffering but we are also standing strong. We are praying that the international community will stand strong with us and help us get the ZAKA ambulances we so urgently need.”