Fifth Terrorist Attack in One Day Thwarted in Jerusalem

Home » Fifth Terrorist Attack in One Day Thwarted in Jerusalem 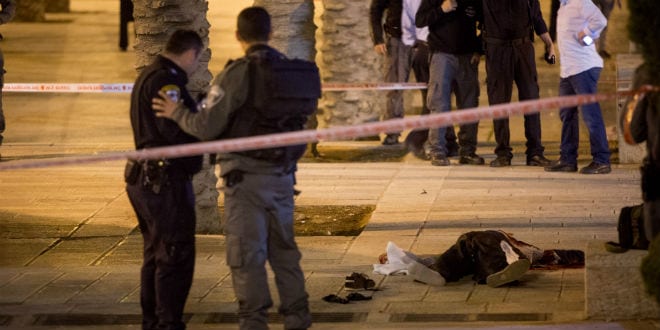 Palestinian  assailants opened fire on passers by between the Damascus Gate and the New Gate of Jerusalem’s old city, shortly before 10 p.m. on Sunday, February 14.

A nearby Police patrol returned fire, neutralizing two terrorists. No civilians or Policemen were injured during the incident.

The Jerusalem Police Spokesperson’s office has confirmed that at least two terrorists armed with automatic rifles arrived at the vicinity of the Damascus Gate and opened fire in the direction of a police patrol.

“The police officers at the scene returned fire quickly and efficiently, killing one of the attackers,” stated Asaf Aharoni of the Jerusalem Police spokesperson’s office.

According to Aharoni’s statement, the second terrorist attempted to flee the scene. Policemen began pursuit of the second shooter, while returning fire and have neutralized the fleeing terrorist.

“Two terrorists have been eliminated thanks to the quick and skillful response of our patrolmen. Currently additional police forces are scouring the are in case of a third shooter,” added Aharoni.

This attempted shooting attack by Palestinian terrorists joins a chain of attacks which have been happening since Sunday morning.

Shortly after 8 p.m. shots were fired on a residential area of the Jewish community of Beit El causing extensive property damage. According to a spokesperson of the Beit El town council, automatic fire was directed at residential buildings from a passing car, coming out of the Palestinian village of Jilazun.

Earlier on Sunday, a Palestinian female attempted to stab a Border Policeman near the Cave of the Patriarchs in Hebron. She was shot by her intended victim and was transported to Shaarei Zedek Hospital in Jerusalem for medical care. The Border Policeman was unharmed.

Additionally, Palestinian terrorist attempted to stab Israeli border policemen at a checkpoint near the neighborhood of Har Homa in southern Jerusalem earlier in the day. The terrorist was shot and neutralized by police and no further casualties were reported.

Early on Sunday morning, two 15-year-old Palestinian terrorists were also shot and killed by IDF forces after attempting to carry out a shooting and stabbing attack.

According to a military spokesperson, the two attackers were armed with guns and knives and opened fire on an IDF force west of the Palestinian city of Jenin. The force returned fire, killing both young men. The terrorists were identified by Palestinian sources as Nihad Muhammad Waked and Fouad Marwan Khaled Waked from the village of Araka.