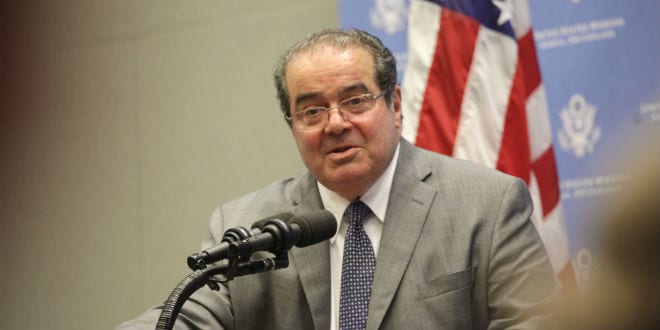 News of the death of Supreme Court Justice Antonin Scalia on Saturday almost immediately sparked a massive debate in the political arena over the weighty question of whether or not President Barack Obama should attempt to fill the opening on the bench during his remaining time in office.

The death of the 79-year-old judge, who died in his sleep during a visit to Texas, was announced on Saturday by a family friend. The famously conservative justice was appointed to the Supreme Court in 1986 by then-president Ronald Reagan and served for nearly 30 years, during which he made a name for himself as a defender of the powers of the executive branch.

Having a hand in the makeup of the Supreme Court was an issue in the current race for the president even before Scalia’s death. The advanced ages of several current justices on the bench made it likely that one or more vacancies would be filled by the next president.

The opportunity to nominate a Supreme Court justice has always been a highly sought-after power, as justices serve for life and wield enormous influence in important court decisions. Scalia’s death splits the bench equally between left- and right-leaning judges, increasing the anxiety felt over the appointment of his successor.

Presidential candidates quickly began weighing in on the argument of whether or not Obama should appoint the next justice. Several GOP candidates, who fear the appointment of a liberal judge, spoke out against Obama making the decision.

“I do not believe the President should appoint someone,” said Florida senator Marco Rubio, who added that Obama would “ram down our throat a liberal justice.”

Texas senator Ted Cruz took a religious viewpoint, warning, “We are one justice away from a Supreme Court that would undermine the religious liberty of millions of Americans.”

He said that the Senate should step in and take steps to prevent Obama from making “one more liberal appointee.”

Donald Trump said he doubted Obama would listen to Republicans and that he was sure Obama would name a nominee, suggesting “delay, delay, delay” to put off such an event.

Democratic candidate Hillary Clinton took an opposite view, reminding the American people at a campaign event in Denver, “Barack Obama is President of the United States until January 20, 2017. That is a fact, my friends, whether the Republicans like it or not.” She added, “The president has a responsibility to nominate a new justice and the Senate has a responsibility to vote.”

Clinton, when speaking on the issue of appointing a new justice several weeks ago in Iowa, had said that she would consider appointing Obama to the Supreme Court if she had the opportunity to fill a vacancy on the bench as president.

Clinton’s rival, Bernie Sanders, released a statement of condolence for Scalia’s family and colleagues, but did not touch on a possible future appointment. “While I differed with Justice Scalia’s views and jurisprudence, he was a brilliant, colorful and outspoken member of the Supreme Court,” he said.

Obama did his best to shut down the debate by announcing on Saturday night that he plans to  “fulfill my constitutional responsibility to nominate a successor in due time,” stating, “There will be plenty of time for me to do so and for the Senate to to fulfill its responsibility to give that person a fair hearing and a timely vote.”

However, the Republican-majority Senate is unlikely to approve an Obama nominee without a fierce fight, and Senate majority leader Mitch McConnell has already stated his belief that the vacancy should be filled by the next president, not Obama.

The question of the next justice in an election year will heat up an already hot race to the presidency. The power to nominate a new Supreme Court judge also puts Obama in the interesting position of staying in the political spotlight, rather than retreating into “lame duck” status.