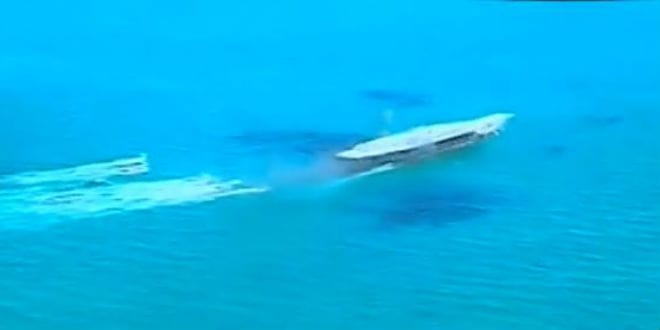 #Iran state TV airs a new footage of #US sailor crying while he was detained in Iran’s waters in #PersianGulf. pic.twitter.com/8st5Uihncc

Resting on their knees with their hands on their heads, they were surrounded by the revolutionary guard at gun point before being dragged to shore. A woman who was stationed with the unit was forced to wear a Muslim hijab and was escorted out of the room when men entered. One of the soldiers apologized for his actions in an interview with Iranian state television and thanked Iran for their “hospitality and assistance.”.

On Thursday, a reenactment of the capture of the US sailors was staged as part of celebrations marking the anniversary of the 1979 Islamic revolution that ousted the U.S-backed Shah. The parade was accompanied by the usual shouts of ‘Death to America’ and ‘Death to Israel’, but this years’ celebrations were also accompanied by shouts of ‘Death to Saudi Arabia’, as the two countries have recently broken off diplomatic relations. On display at the parade was an Emad long-range ballistic missile that is part of the controversial Iranian missile program that violates international law.

The timely return of the sailors through diplomatic means was initially presented by the White House as a diplomatic win, however others, including Secretary of State John Kerry, have been critical lately of how the situation was handled.

Cmdr. Kevin Stephens, spokesman for Naval Forces Central Command said in a statement, “As Secretary of State John Kerry has said, we are disgusted by the exploitation of our sailors in Iranian propaganda. The detention of our personnel was outrageous and unacceptable.”

Stephens said that according to international law, the Iranians should have escorted the riverines from their waters and offered assistance if mechanical issues prevented them from complying immediately.

“The responsible action for the Iranians to have taken upon discovering our RCBs in their waters would have been to calmly and peacefully direct our RCBs out of their territorial waters or offer assistance if the apparent mechanical issues in one of the boats prevented them from departing immediately,” Stephens added.

“It’s outrageous and unacceptable that our Sailors were held at gunpoint and detained. We are grateful diplomacy worked at the end of the day, but it would never have come to that had the Iranian maritime forces involved behaved professionally and responsibly.  (Iran) did not have the right under international law to detain and inspect the vessels or to detain the crews.”