On Mt. Zion, a Donkey to Redeem Israel is Blessed in Rare Biblical Ritual [PHOTOS]

Home » On Mt. Zion, a Donkey to Redeem Israel is Blessed in Rare Biblical Ritual [PHOTOS] 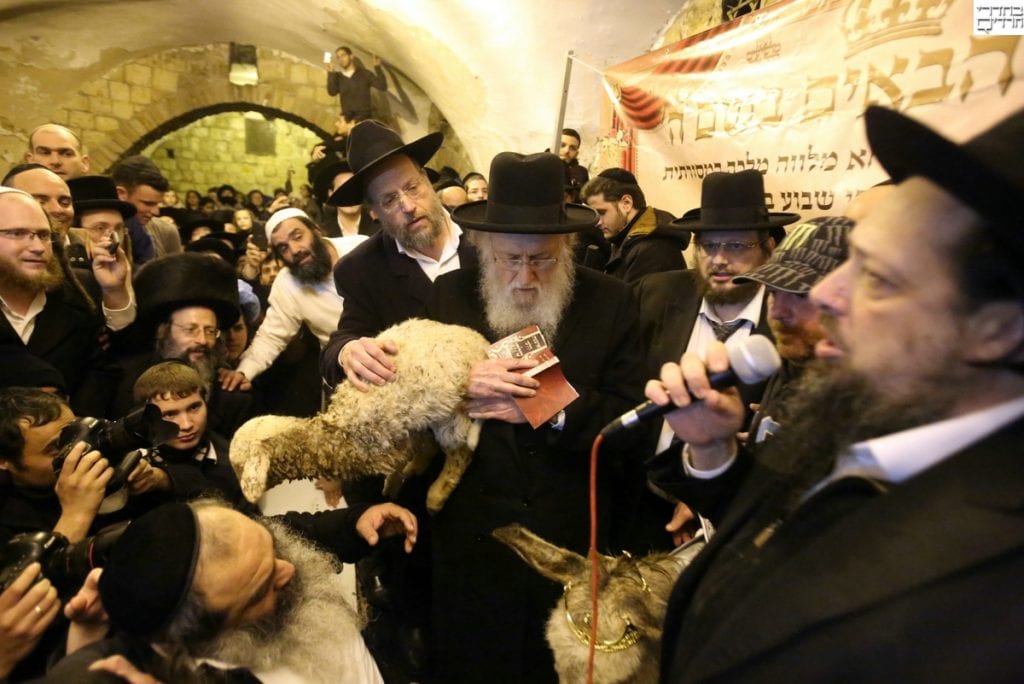 There are many Torah commandments (mitzvot) that even the most observant Jew living outside of Israel will never see or perform. Some of these mitzvot are making a comeback and having a most unanticipated effect.

Last Saturday night, a baby donkey was brought to the Tomb of King David on Mount Zion to be redeemed. What many consider an obscure agricultural ritual turned into a joyous celebration that ended with passionate cries for the coming of the Messiah.

Petter Chamor (redeeming a firstborn donkey) is mentioned three times in the Torah (Exodus 13:13; Exodus 34:20; Numbers 18:15). Redeeming the firstborn donkey is necessary since, when it is born, it is considered Hekdesh, or sanctified, and belonging to God via his emissary, the kohen, or high priest. The owner of the donkey’s mother has the right to use the donkey after he redeems it by giving a sheep to the priest in its place.

The story begins with a man from Bnei Berak who owned a jenny – a female donkey – which gave birth to a foal. He approached Rabbi Berger, the rabbi of King David’s Tomb, which is located in Jerusalem’s Old City.

Rabbi Berger told Breaking Israel News that the man wanted to redeem the donkey in the place that symbolizes the unity of Israel under one king. As Rabbi Berger explained, “This is the place where the entire nation of Israel will be redeemed, so it is only fitting.”

The rabbi was thrilled by the prospect of performing the rare commandment, and arranged for it to be done at the most auspicious time for the Kingdom of David: Saturday night after the Sabbath ends. A special feast, accompanied by music, is usually held at that time at the Tomb of David, but with the addition of one tiny foal, this became an extra-special occasion.

Rabbi Simcha Hacohen Kook, Chief Rabbi of Rehovot and the Hurva Synagogue in Jerusalem, served as the kohanic emissary to receive the young donkey. Other esteemed rabbis, among them Rabbi Aharon Yitzchak Stern and Rabbi Shalom Arush, attended the ceremony as well.

The small donkey was decorated and adorned with a crown, since, as Rabbi Berger explained, “This donkey, by bringing about this mitzvah, connects us to God, so it is fitting we should honor it and make it beautiful.”

He then recited the blessing:

Blessed art thou, King of the universe, who has sanctified us with his commandments, and commanded us to redeem the firstborn donkey.

Then he recited the blessing of shehechayanu, a blessing which is said on special occasions when one is celebrating a “first”. The blessing thanks God for sustaining the reciter until this auspicious moment.

Rabbi Berger described the great excitement of the gathered crowd when they heard the rare blessing. Those gathered chanted together, “God, just as you redeemed this donkey, please redeem all of Israel and bring moshiach (messiah) now!”

Breaking Israel News asked Rabbi Berger about the significance of the mitzvah. He explained that it was connected to the Exodus from Egypt, which is one of the major principles of Judaism.

“The Torah says that we do the mitzvah of redeeming the firstborn of a donkey in memory of the final plague in Egypt, in which the firstborn of Egypt were killed (Exodus 11:5). We know that every Jew who has a first-born son must redeem him for this reason as well,” Rabbi Berger said.

The rabbi explained why the donkey, out of all the animals, was chosen for remembering the Exodus. “The Talmud (oral law) says that the mitzvah is a reward for the donkey, a merit it is given through helping Israel connect to God,” he told Breaking Israel News. “It earned this reward by helping Israel carry the Jews and all the wealth out of Egypt. In the Torah, gratitude is very important, so we must show gratitude to the donkeys that carried us out.”

In these days which seem to clearly be paving the way for the messiah, it is exciting to see that every creature, great and small, will play a part.