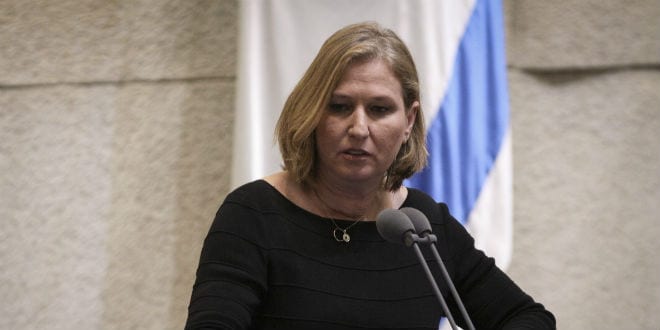 “We must treat the international media arena as a hostile arena,” Livni said. “I do not think the State of Israel should not be criticized, that is the media’s job. The problem lies in those cases where Israelis and Palestinians who are killed in the same incident are placed in one package. This conduct creates the sense that these murders are not linked in any way, to the point where they are viewed as road accidents.”

MK Michael Oren (Kulanu) noted that “the number of foreign journalists is huge compared with those who are covering Syria. Moreover, whenever there is an incident with casualties in Iraq, the headline is much smaller compared with much less significant incidents in Israel.”

The Government Press Office director Nitzan Chen said, “We do not examine the quality of the reports or the facts that are published. This is a free country with freedom of expression.”

Chen noted that when CBS News ran a similar headline following a December 24 terrorist attack, the president of the network apologized and said junior staffers had made a mistake. Chen said he had received no response since the GPO had complained about the Cohen story headline.

“Since October, most reports of the foreign press have been reasonable,” Chen told the lawmakers. “There have been four or five incidents in which headlines following a terrorist attack were so twisted that news consumers in that particular country would have received the opposite impression.”

Besides the CBS News headlines, Chen singled out a BBC headline from October: “Palestinian shot dead after Jerusalem attack kills two” — about a Palestinian terrorist who was killed after murdering two Jewish civilians in Jerusalem’s Old City.

Reuters’ Jerusalem Bureau chief and Foreign Press Association head Luke Baker rejected the claims of unbalanced or biased coverage by the foreign media. “We go through a very rigorous process whenever news happens, where you have those who speak Hebrew in contact with police, the army and many spokespeople and people who are on the ground,” he said. “This is a pretty rigorous process of reporting and fact checking.”

Baker noted that since the beginning of the current wave of violence, Reuters had published 700 headlines, only one of which turned out to be problematic and was subsequently corrected.

“I clearly don’t think the foreign press is biased,” he stated. “I don’t think anyone is denying there have been errors and problems from time to time. Some have been harder to correct than others.” He said the large number of news organizations operating in Israel are putting out “a huge amount of coverage with very few factual errors.” he added, “I fail to see the media have anything to answer in terms of systemic bias.”