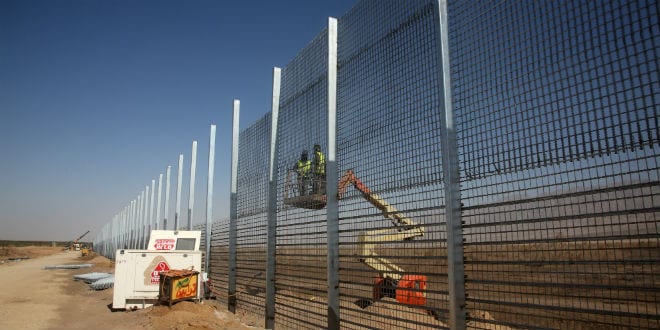 Israel must surround itself with a security fence on all of its borders in order to keep out the “beasts” in the neighborhood, said Israeli Prime Minister Benjamin Netanyahu on Tuesday. He announced the plans for constructing this barrier while touring a new security fence near Eilat which is being built along Israel’s border with Jordan.

“We are preparing a multi-year project to encircle Israel with a security fence, to defend ourselves in the Middle East as it is now, and as it is expected to be,” he said. “At the end, in the State of Israel, as I see it, there will be a fence that spans it all.”

“They will say to me, ‘This is what you want, to protect the mansion?’ And the answer is yes. ‘What, we will encircle the whole country with fences and barriers?’ The answer is yes,” Netanyahu asserted.

“In the neighborhood in which we live, we need to protect ourselves against beasts.”

Plans are also being drawn up to fill in gaps in the security fence in Judea and Samaria, Netanyahu added, though the details have yet to be worked out. While a large fence is planned for the highly-populated settlement blocs of Ma’ale Adumim, Ariel, and Gush Etzion, as of now, only a small section has been built.

Netanyahu tours the fence under construction every few months to monitor its progress. In recent years, Israel has built a barrier stretching for 242 kilometers (88 miles) along the Egyptian border. The barrier includes the fence, whose height is five meters, or about 16 feet, and a thin, sensitive strip used by IDF trackers to identify footprints. Another length of fence, stretching for 103 kilometers (64 miles), has gone up in the northern Golan Heights, and 500 kilometers (310 miles), of fence have been erected in Judea and Samaria.

The prime minister also made reference on his tour to another border security concern: terror tunnels. In recent weeks, Hamas’s tunnel-building efforts have escalated to the point where residents near the Gazan border say they can feel the vibrations of tunnels being dug beneath their homes. The frenzied digging has also led to five tunnel collapses in Gaza.

Netanyahu pointed out that one of the advantages of building a fence on Israel’s southern borders with Egypt and Jordan is that the areas are open, without buildings nearby which could camouflage the construction of terror tunnels.

“That is not the situation in Gaza, or potentially in Judea and Samaria,” he said. “If you weigh whether to build a fence there you have to take into consideration that they could dig tunnels underneath.”